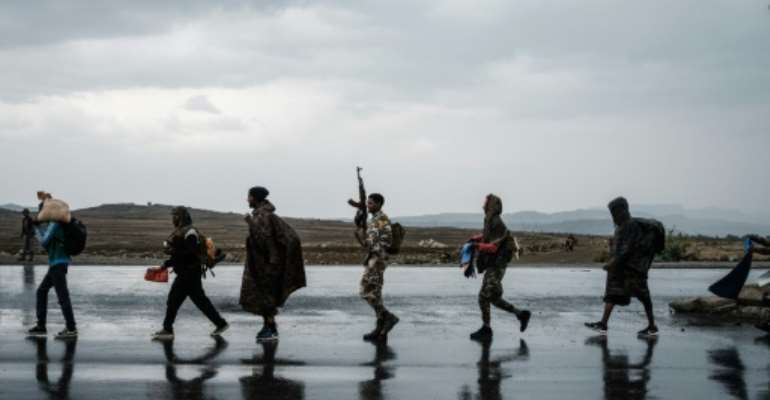 US aid chief Samantha Power has called on rebel forces to "immediately" withdraw from two regions bordering Ethiopia's war-hit Tigray, as the conflict threatens to envelop the rest of the country.

Tigray has been in the throes of a humanitarian crisis for months, with hundreds of thousands of people suffering from famine, according to the UN, while aid workers' access to the northern region remains hobbled by delays and bureaucratic hurdles.

Abiy declared victory within weeks after government forces took the Tigray capital Mekele, but TPLF leaders remained on the run and fighting continued.

Since then the rebels have launched new offensives into the Amhara and Afar regions which border Tigray, displacing tens of thousands of people.

Power, who is visiting Ethiopia, said on Twitter late Tuesday that the TPLF must "withdraw its forces immediately" from Amhara and Afar.

"If aid is to reach people in need in #Tigray, then ALL parties must end hostilities. There is no military solution to this conflict," she wrote on Twitter.

"All parties should accelerate unhindered delivery of humanitarian assistance to those affected by the conflict, and the commercial blockade of Tigray must end."

The US has traditionally seen Ethiopia as a crucial partner in the volatile Horn of Africa region, but the Biden administration has been openly critical of the Tigray war.

In March US Secretary of State Antony Blinken said acts of ethnic cleansing were unfolding in western Tigray.

And in May he announced visa restrictions on Ethiopian and Eritrean officials accused of fuelling the conflict, saying those involved had "taken no meaningful steps to end hostilities."

Abiy has said the ceasefire announced in June was intended to facilitate the delivery of humanitarian assistance, but aid workers say access is as bad as ever.

Ethiopia said Wednesday that 157 trucks of humanitarian assistance had reached Mekele, including food and non-food items from the UN and international non-governmental organisations.

It was not immediately clear whether all those trucks were new arrivals or if the tally included a previous 50-truck convoy that arrived in July.

UNICEF estimated last week that more than 100,000 children there could suffer from life-threatening acute malnutrition in the next 12 months -- 10 times the annual average.

At a press conference Tuesday in Addis Ababa, UN humanitarian chief Martin Griffiths stressed that 100 trucks need to reach Tigray each day to meet needs on the ground.

Griffiths also condemned "dangerous" accusations by Ethiopian government officials that aid workers were biased in favour of -- and even arming -- TPLF forces.