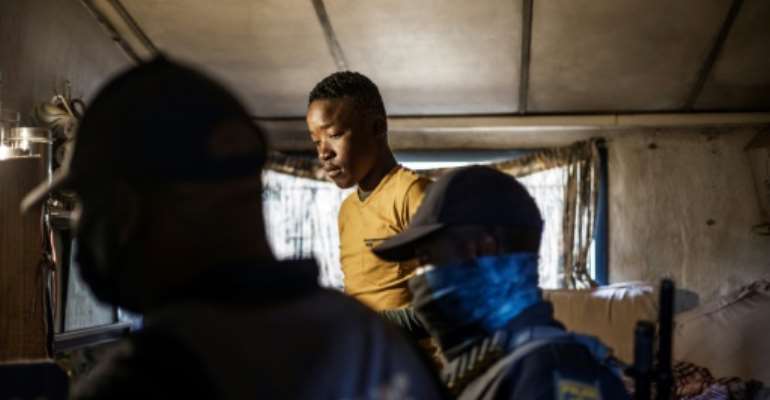 Police go through a home at the Nguni Hostels in the Johannesburg suburb of Vosloorus, looking for goods looted from a nearby shopping mall. By MARCO LONGARI (AFP)

A lively radio tune stopped abruptly as a line of armed police officers marched into a Johannesburg township on Tuesday morning, hunting for stolen goods almost two weeks after the end of widespread riots and looting.

Pulling on blue plastic gloves, they fanned out across rows of identical concrete houses where most residents were still sleeping under corrugated iron roofs, the window frames stuffed with cardboard to keep out the winter draught.

Closed faces peered out from doorways at the group of uniformed officers and soldiers deployed to help quell any unrest.

The mood was resigned and calm, with little sign of resistance, an AFP reporter observed.

A soldier patrols as police search the hostels. By MARCO LONGARI (AFP)

The Nguni Hostels, a run-down housing facility on Johannesburg's southeastern outskirts, lie just a few kilometres (a couple of miles) from a shopping centre ransacked by looters earlier this month.

Protests that broke out after the jailing of South Africa's ex-president Jacob Zuma on July 8 escalated into chaos, with violent unrest and looting in parts of the country.

Raids are not unusual in hostels -- dormitory blocks built for black migrant workers during apartheid but now inhabited by poor city dwellers and sometimes criminal gangs.

But this time police were on one of several missions to recover plundered goods, searching for suspiciously new-looking objects with no proof of purchase.

The operation began shortly before 9 a.m., with armed soldiers deployed outside. Sometimes police knocked on the doors of homes, but in other cases simply went in.

A resident looks on as police search her home. By MARCO LONGARI (AFP)

A woman in a lilac-and-white polkadot dressing gown stood by a gas stove, hands in her pockets as officers in bullet-proof vests walked past a communal kitchen table and down a narrow corridor lined with doors.

They entered a bedroom still fuggy with the smell of sleep, opening the pots and cupboards of another resigned-looking resident, sitting up in bed with a blanket wrapped over her legs.

Next door, policewomen in plastic aprons lifted up mattresses and looked under a bed, where they found and confiscated two pairs of sneakers.

Seized goods were taken outside and piled into the back of white pick-up trucks.

A woman is questioned about the contents of her fridge. Food, more than electronic goods, accounted for most of items that were confiscated on Tuesday. By MARCO LONGARI (AFP)

"This is something that has never happened, taking things like this away," muttered one policeman who did not wish to be named.

He admitted not knowing what would happen to the wares once they were delivered to the police station. After confiscating the goods, police took no further action against those who were in possession of them.

Wails suddenly broke out from one of the houses.

Confiscated: Crates of beer join other suspected stolen goods that police haul away from the hostel. By MARCO LONGARI (AFP)

Police had discovered more than two dozen crates of stolen beer bottles, upsetting an inebriated elderly woman in a red woollen cap who had presumably intended to sell them.

"For what? For what?" she asked men lugging the boxes away before tripping over her walking stick and falling on the floor.

A man helped her up and gently ushered her to the side.

The search continued late into the morning amid relative calm.

No one protested when police sometimes cut padlocks or kicked down doors, raising clouds of dust.

Curious onlookers gathered outside to watch the operations.

A corner-shop owner emerged from his store with a look of relief as police left the premises empty handed.

He grinned victoriously and held up a crumpled receipt.