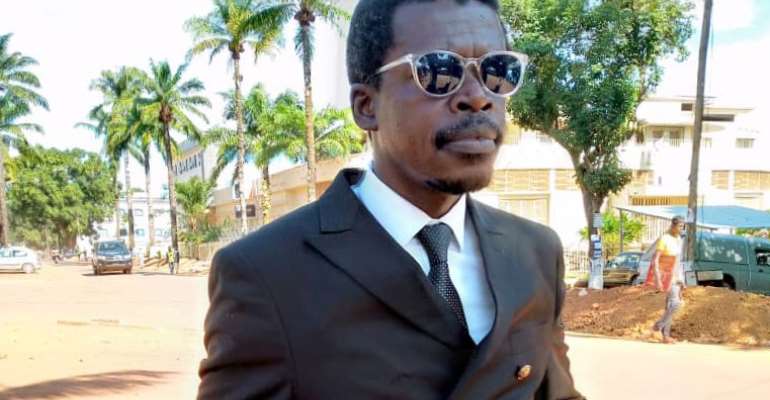 At about 4 p.m. on June 3, police officers with the Central Office for the Repression of Banditry (​OCRB) arrested Nguema Ngokpélé, the publication director of the privately owned Le Quotidien de Bangui newspaper, according to news reports, the journalist, who spoke to CPJ via messaging app, and a statement by the Central African Journalists’ Union.

The officers took the journalist to the Ngaragba Central Prison in Bangui, the capital, where they held him overnight and granted him provisional release the following day, according to the journalist and a copy of the release order reviewed by CPJ.

Police raided Nguema Ngokpélé’s room at the Bangui Ledger Plaza hotel while he was in detention and seized two computers, he said, adding that they had not been returned as of today.

“There was absolutely no reason for journalist Landry Ulrich Nguema Ngokpélé to have been arrested or to face legal harassment for his reporting,” said Angela Quintal, CPJ’s Africa program coordinator, in New York. “Authorities should swiftly return Nguema Ngokpélé’s computers and ensure journalists in the Central African Republic can work free from intimidation.”

The defamation investigation stems from a complaint filed by Harouna Douamba, the president of Aimons Notre Afrique, a local nongovernmental organization. The complaint, which CPJ reviewed, cites a 2018 article by Le Quotidien de Bangui alleging that Douamba had swindled government authorities.

Nguema Ngokpele, however, told CPJ that he believed the complaint was retaliation for a separate article, which alleged that Douamba’s organization had not paid rent for its office space.

The complaint also alleged that Nguema Ngokpélé asked Douamba to pay him in exchange for having the article taken offline, a claim the journalist denied.

CPJ repeatedly called Douamba for comment, but he did not answer.

Vicent Namroba, the general rapporteur of the High Council of Communications, the Central African Republic’s media and communications regulator, told CPJ in a phone interview that under the country’s laws no journalist should go to prison for their work, but they may be fined.

Nguema Ngokpélé told CPJ he was arrested while making a required appearance at the Bangui prosecutor’s office as part of a separate defamation case from September 2020. That case stemmed from Le Quotidien de Bangui’s coverage of alleged corruption by the country’s minister of water, forestry, hunting, and fishing, the journalist told CPJ; he added that he is required to appear at the prosecutor’s office weekly in relation to that case.

Nguema Ngokpélé said that case was transferred to the Bangui Correctional Court on March 17, a jurisdictional decision which he had appealed.

While checking in for that required appearance on June 3, Judge Thierry Blaise Angalaka-Nzapato informed Nguema Ngokpélé of Douamba’s complaint, questioned him about it, and then ordered police to arrest him, the journalist said.

Angalaka-Nzapato also issued the warrant to raid Nguema Ngokpélé’s hotel room while he was imprisoned, and told him his computers were being “examined” by the OCRB and would be returned to him in the presence of a lawyer, the journalist said.

Nguema Ngokpélé told CPJ that he does not have a lawyer, and said he was “handicapped [in my work] since I have to run the newspaper with the means at my disposal.”

CPJ’s called Angalaka-Nzapato, Bangui prosecutor Alain Lengandet, and the official who filed the September 2020 complaint for comment, but no one answered.

Jean Saint-Clair Maka Gbssokotto, the coordinator of the Consortium of Central African Journalists Against Disinformation, told CPJ by messaging app that the arrest of Nguema Ngokpele had been “arbitrary” and said, “the press is muzzled and journalists in CAR face threats on a daily basis.”

Nguema Ngokpélé told CPJ that he has also filed three recent complaints to the Bangui public prosecutor over threats he received in response to his news coverage. CPJ reviewed those complaints, which allege threats from local officials and from a since-deleted Facebook account.

The journalist told CPJ that he has not received any response from the public prosecutor in relation to those complaints.