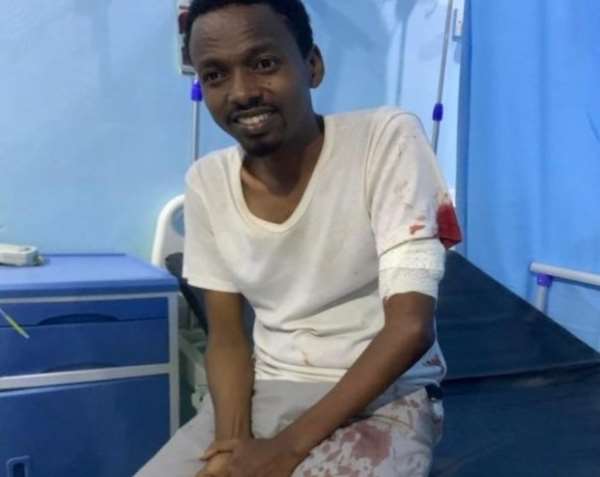 Somali authorities should investigate the recent attack on journalist and press freedom advocate Hanad Ali Guled and hold those responsible to account, the Committee to Protect Journalists said today.

On the night of June 23, four unidentified men attacked Hanad, chief editor of the privately owned broadcaster Goobjoog Television, according to a report by Goobjoog, a statement by the Somali Journalists Syndicate, a local press rights group, and Hanad, who spoke to CPJ via messaging app.

The journalist, who also works for the syndicate, was near his home in Mogadishu’s Wadajir district when the men confronted him, threatened to kill him, and punched and kicked him all over his body, he said. Two of the attackers cut his left arm and the back of his neck with knives, and then the group fled when Hanad screamed in pain, Hanad told CPJ.

Hanad told CPJ that the attack had been reported to the police, but that no arrests had been made as of July 9.

“Somali authorities have a duty to promptly and credibly investigate the attack on journalist and press freedom advocate Hanad Ali Guled, determine if it was retaliation for his work, and ensure that those responsible are held to account,” said CPJ’s sub-Saharan Africa representative, Muthoki Mumo. “Any lingering unanswered questions in this case will force Hanad and his colleagues to live in fear, and will only reinforce the message that Somali journalists can be attacked with impunity.”

Hanad was treated at the local Kalkal Hospital for wounds on his neck and arm, and was discharged the following morning, he said. He added that he returned to the hospital for five follow-up appointments as of July 7, and still had pain on his left arm.

Hanad and Abdalle Ahmed Mumin, secretary-general of the Somali Journalists Syndicate, both told CPJ via messaging app that they did not know the motive for the attack or the identities of the assailants.

Both said they feared the attack was reprisal for Hanad’s work with Goobjoog or the syndicate, where Hanad works as the training secretary, in charge of coordinating safety and labor rights workshops and trainings for journalists.

Goobjoog Television covers general regional, national, and international news, according to CPJ’s review of its website and YouTube channel . In the week before the attack, the station had covered recent elections in the breakaway region of Somaliland and upcoming federal elections, and Hanad occasionally conducts interviews and anchors the show’s news round-up program .

Hanad said that the attackers did not say anything other than the threats to kill him, and did not reference his work as a journalist. He added that he lost two cellphones in the attack, but was unsure if the men stole them or if he dropped them during the scuffle.

Abdalle told CPJ that he reported the attack on Hanad to police on June 24.

Previously, in February, Somali security forces harassed at least four Goobjoog journalists , and in 2020, authorities convicted the broadcaster’s deputy director , Abdiaziz Ahmed Gurbiye, on charges of publishing false news in reporting that was critical of the government’s management of the COVID-19 pandemic, as CPJ has documented.

Unidentified gunmen previously abducted Hanad in April 2017 and held him overnight until he escaped, in an attack that believed was retaliation for his work at Goobjoog, according to multiple media reports from the time and Hanad.

The Somali Journalists Syndicate, established in 2019, has frequently covered attacks on the press in Somalia, including by security personnel and the militant group Al-Shabaab, and has published critical statements on federal and regional authorities’ failure to tackle impunity in attacks on the press, according to CPJ’s review of statements posted on its website . Abdalle, in the syndicate’s statement following the attack on Hanad, wrote that there were “ongoing threats” to the syndicate’s staff.

Abdalle told CPJ that unidentified men have frequently sat in vehicles outside the syndicate’s office in Mogadishu for days at a time, and said he suspected the group was under surveillance by intelligence personnel. He said he had seen those men in November 2020, and March and May 2021.

Separately, on June 10, unidentified men who falsely claimed to be Abdalle’s relatives went to the syndicate’s office and asked for his whereabouts, he said, adding that he filed a police report on June 12 and an investigation was still underway.

Somalia is one of the world’s most dangerous countries for journalists, and for six years the country has topped CPJ’s Impunity Index —a report that spotlights countries where those who murder journalists escape justice.

When asked about the attack on Hanad and the threats against the syndicate’s staff, Guled Sheikh Ahmed, the commander of Mogadishu’s Criminal Investigations Department, told CPJ via messaging app on July 9 that those affected should explain the attack to him so police could “investigate his case to find what transpired.”

When CPJ asked today whether Guled’s response was in reference to Hanad or the syndicate, or both, he did not respond.

On July 8 and July 9, CPJ contacted Farhan Mohamud Adan, the Banadir regional police commander whose jurisdiction includes Mogadishu, via messaging app, but he did not respond. CPJ repeatedly called Zakia Hussein, Somali’s deputy police commissioner and messaged her via Twitter, but she did not respond.

Somali police commissioner Abdi Hassan Mohamed Hijar also did not answer a message from CPJ sent via Twitter; an email sent to the police force returned an error message saying that it could not be delivered.

CPJ also emailed Somalia’s National Intelligence and Security Agency for comment on the surveillance allegations, but did not receive any response.