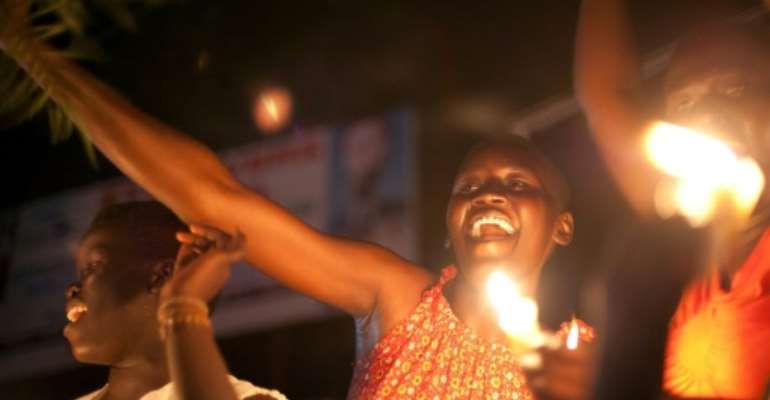 South Sudanese celebrate as the clock ticks over to midnight on July 9, 2011, the day South Sudan officially declared independence. By PHIL MOORE (AFP)

As South Sudan marks 10 years of independence on July 9, we look back at the world's youngest country's bloody first decade, marred by a civil war that claimed 380,000 lives.

On July 9, South Sudan proclaims itself independent from Sudan following six years of autonomy and two decades of war.

The president is Salva Kiir, with Riek Machar as his deputy. From different ethnic groups, the rivals also led the Sudan People's Liberation Movement (SPLM) that spearheaded the push for independence.

The new South Sudan takes over three-quarters of the oil reserves of the old Sudan while Khartoum retains control of all pipeline and export facilities.

Other thorny issues are the tracing of the new border and the status of disputed regions such as oil-rich Abyei.

The countries clash between March and May over rights to the oil fields around Heglig, a town just inside Sudan.

South Sudanese troops briefly occupy the area, which accounts for half of Sudan's crude oil production.

South Sudan halts its production in January for more than a year, accusing Khartoum of theft.

Kiir fires Machar and all government ministers, their deputies and several police brigadiers on July 23.

After a night of fighting in the capital Juba, Kiir says on December 16 his forces had thwarted an attempted coup by Machar, who denies the claim.

Rival army units clash in Juba. The fighting spreads beyond the capital, fuelled by rivalries between Kiir's Dinka group and Machar's Nuer.

It sets off tit-for-tat massacres that turn into six years of war.

Machar and Kiir sign a peace accord in August 2015 that provides for Machar's reappointment as vice president.

But fighting between supporters of both leaders breaks out again in July. Machar goes into exile, accusing Kiir of trying to have him killed.

Kiir and Machar meet for the first time in two years on June 20.

On September 12 they sign a new peace agreement to end a war that has killed more than 380,000 people and displaced roughly four million.

It paves the way for a power-sharing government which is eventually installed in March 2020, with Machar again vice president.

However, the armed conflict continues.

The UN several times extends its peace mission, as well as an arms embargo.

In June 2020 Kiir and Machar agree on control of the country's 10 states, the main remaining sticking point.

A UN report in April warns that the slow pace of implementing the peace accord risks a relapse into "large-scale conflict".

On May 8, after a delay of more than a year, Kiir includes opposition lawmakers in a new parliament.

A final drafting of a constitution begins on May 25.

Other points of the peace accord, such as the formation of a unified national army, remain to be resolved.