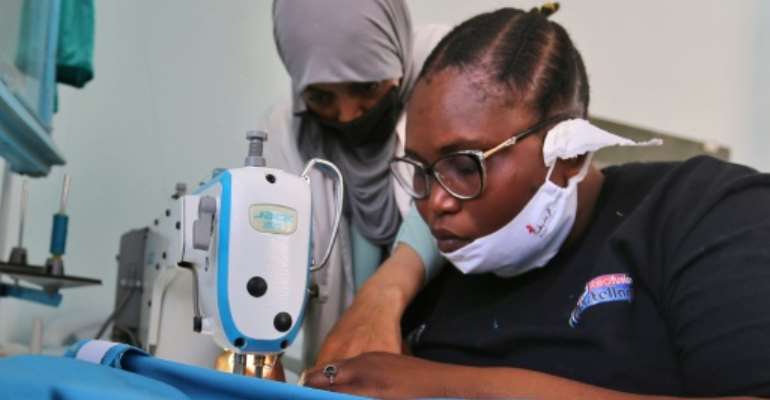 The Organisation for the Support of Migrants runs French and sewing classes for migrants like Ivorian national Bintou. By FATHI NASRI (AFP)

In the front row of a small classroom, three women, all different nationalities, avidly learn French in southern Tunisia's stifling summer heat -- grateful for support from an umbrella of charities.

Based in the city of Medenine, it's a rare locally driven opportunity for migrants to better themselves and integrate, in a wider North Africa region that is often far from welcoming.

And despite Tunisia's own biting economic crisis and the rampant poverty in its under-developed south, local associations have banded together to offer the less fortunate support.

Awa, from Ivory Coast, speaks good French, but wants to learn to read and write in the language.

"I never went to school," she said, her baby on her knee. "If you cannot read or write, it is as if you live in the dark -- you cannot do anything."

Banished by her family for refusing to marry, she travelled to war-torn Libya in the hope of crossing the Mediterranean to Europe, but was prevented from taking to the sea and detained.

Computer classes are also offered to the migrants, many of whom originate from sub-Saharan Africa. By FATHI NASRI (AFP)

"I was pregnant, and due to give birth," Awa said, adding that she was told Tunisia "was welcoming because it is not in a state of war".

That advice brought her to Medenine, where she attends a day centre run by the Organisation for the Support of Migrants, an initiative by eight Tunisian medical outfits that offers support to mainly female migrants.

Fellow Ivorian Bintou has discovered an inner confidence thanks to sewing lessons offered at the day centre.

"I have already sewn beautiful dresses -- it's a job that fascinates me," she said.

"It inspires me," she added, noting that she'd wanted to be a tailor even before she left her home country.

Like Awa, Bintou arrived in Tunisia in July last year.

Both are tempted to stay, largely because, as Bintou puts it, "it is peaceful," even if she sometimes suffers street harassment and racism.

Over the last decade, the number of migrants of sub-Saharan origin arriving in Tunisia has swelled substantially.

French classes are offered to children too. By FATHI NASRI (AFP)

They range from foreign workers displaced from Libya --- a country mired in chaos since the 2011 fall of dictator Moamer Kadhafi -- to asylum seekers and new immigrants looking for work in Tunisia.

In the last six months alone, 1,000 people who embarked from Libya to Europe have been picked up in Mediterranean waters by Tunisian vessels and ended up in the country, according to the International Organisation for Migration.

The danger of that crossing was brought into sharp focus again this weekend, when over 60 migrants disappeared or died as two boats sank in less than 72 hours off Tunisia.

With the country mired in an economic crisis that leaves it unable to meet the needs of its own citizens, migrants are low on the list of political priorities.

Two reception centres managed by UN agencies were established in Medenine in 2014 and 2015, but were quickly overwhelmed.

These limitations prompted the Organisation for the Support of Migrants to form and kick into action.

"We felt that things were wrong -- we saw migrants begging in the street," explained Abdallah Said, a Tunisian of Chadian origin whose work as a civil servant in Medenine involves collaboration with the umbrella group.

The local municipality offered use of a building for the day centre, despite facing its own funding constraints. By FATHI NASRI (AFP)

The organisation advises day centre attendees on their options and provides them "with time to think about what they want to do" next, Said explained.

"That's why they feel comfortable."

The initiative also brings the migrants into contact with Tunisian women.

In the small classroom hosting the French class, Tunisian citizen Fatma hopes to learn French in order to join her brother in France.

The West African migrants help her develop her skills.

"I teach them Arabic and they teach us French," she said.

The initiative has had some help from the authorities -- Medenine municipality provided a building for it to use as its headquarters.

But the area is severely economically deprived, suffering an unemployment rate of nearly 20 percent, and cannot do more, according to municipal mayor Moncef Ben Yemma.

"I don't even have the funds to build roads," he lamented.

The centre also provides migrants breathing space and advice on options for the future. By FATHI NASRI (AFP)

While there is an inclination to help migrants at the local level, there is resistance at the national level.

Tunisia tolerates irregular migrants, but it is very difficult for such foreign African nationals to legitimise their immigration status.

And Prime Minister Hichem Mechichi has rejected calls by the European Union and others to establish reception centres.

"Tunisia will not be a land of asylum", he declared in May this year.