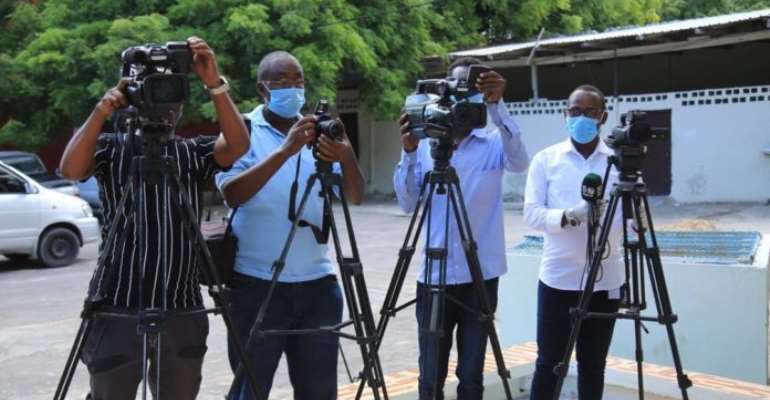 Journalists gather to cover a public event in Mogadishu in March 2021. | Photo/SJS

SJS notes importance of federal and state authorities to allow free and independent media to monitor national and international responses to the outbreak and promote transparency and accountability.

Local media editors, reporters and producers and independent data journalists interviewed by SJS revealed how the Federal Ministry of Health (FMoH) enforced secrecy to limit criticism of poor decision-making or hide corruption allegations as the pandemic took hold in all corners of the country.

“It has been extremely difficult to access information including government’s response to Covid19 outbreak. As the country was hit the second wave of the pandemic, we tried more than 20 times to speak to officials at the Federal Ministry of Health. We also reached out to the Minister of Health several times but all our requests for interviews were declined,” Hanad Guled, Goobjoog Media’s news editor told SJS, “Instead of responding to our questions, Health officials referred to their social media accounts for quotes.”

From the onset of the outbreak, Somali authorities deliberately targeted journalists covering Covid19. Between April to June 2020, three journalists were detained and at least one was jailed and prosecuted over Covid19 related coverage in Mogadishu and Kismayo. Somaliland has warned journalists who report Covid cases without further having confirmation from the authorities will be labelled as ‘national criminals’.

Reports show that public awareness on Covid19 was low and had resulted to high vaccine hesitance among the public. A confidential vaccine data seen by SJS shows less than 1% of the population vaccinated while the target was 20% of the 15 million population in Somalia. This can be attributed to the lack of accurate information released to the public and limited or no public awareness by the government, while journalists did not have access to trustworthy information needed to report and to counter disinformation.

“Risaala Radio was on the forefront to contain the pandemic. Starting from March 2020, we broadcasted weekly and monthly program intended to help the people understand the virus through timely information and stop disinformation about the pandemic. However, we were blocked and denied to get the information we needed,” Hassan Abdi, senior producer and deputy management of Risaala Media Corporation told SJS “It was like the officials at the Ministry of Health were hiding something. Only doctors from private hospitals were able to speak to us.”

Similar experiences were described by a local data reporter who told SJS in June this year that when he contacted officials at Martini Hospital— the main hospital used to quarantine and treat Covid patients— to corroborate his figures with those of the official records, hospital authorities, who acted on instructions from the Health Ministry, refused to provide information.

“I believe more lives could have been saved if a timely and accurate information was made available to the public. Unfortunately, this did not happen as the health officials deliberately kept this lifesaving information to secret just to avoid public criticism on their slow efforts,” the data journalist who requested anonymity due to safety concerns added, “It was hard to detect fake news and disinformation about the pandemic that spread throughout the public circles.”

Covid19 pandemic has not only caused significant challenges for the already weak healthcare system in Somalia, but also it has fuelled in the proliferation of rumours, hoaxes and misinformation. As stated by Yusuf Abdi Shire, a senior editor of RTN TV, if people don’t get the accurate information, “then they will make their own interpretation that will also give rise to rumours.”

“When the vaccine roll-out begun there were many questions and rumours spreading fast and it is still going on. We tried to speak to Ministry of Health officials including the minister about the vaccine awareness. I got a response that they cannot talk to us. Details about the vaccine or Covid deaths remain as a secret that nobody can access,” Yusuf told SJS, “I think correct information could have helped solve the crisis, fight rumours and help vaccines reach to the public but the government acted differently.”

Journalists in Jubbaland and Hirshabelle, two of Somalia’s Covid19 hotspots, told SJS that lack of transparency in the health information led to low vaccine uptake. As of late June 2021, both regional states used less than 50% of AstraZeneca vaccine doses (25,000 doses for Hirshabelle) and (30,000 doses for Jubbaland) distributed to them, according to data seen by SJS.

“Timely and evidence-based information are the best vaccine against rumours and misinformation. Unfortunately, authorities are still reluctant to speak about the number of deaths. The awareness is very low. Officials at the health ministry don’t answer our questions about Covid,” said a local radio editor based in Beledweyne.

Taking note of this, SJS reiterates that it is essential for both federal and regional authorities to provide truthful information about the nature of the threat posed by the pandemic. Under the Provisional Federal Constitution and international human rights law, the government is obliged to provide reliable information in accessible formats to all, with particular focus on ensuring access to information by those with limited internet access or where disability makes access challenging.

“The right to access to information for journalists is crucial for ensuring public awareness and trust, fighting fake news and disinformation, ensuring accountability. Accurate information can help save lives,” Abdalle Ahmed Mumin, the secretary general of Somali Journalists Syndicate (SJS) said, “We call for the regional and federal ministries of health to recognise the role of independent media to monitor and scrutinise public officials about the way they implement public policies aimed at solving the crisis. It is crucial that the right to information is maintained during the emergency as much as possible.”