Why the Oak tree overshadowed the Porcupine 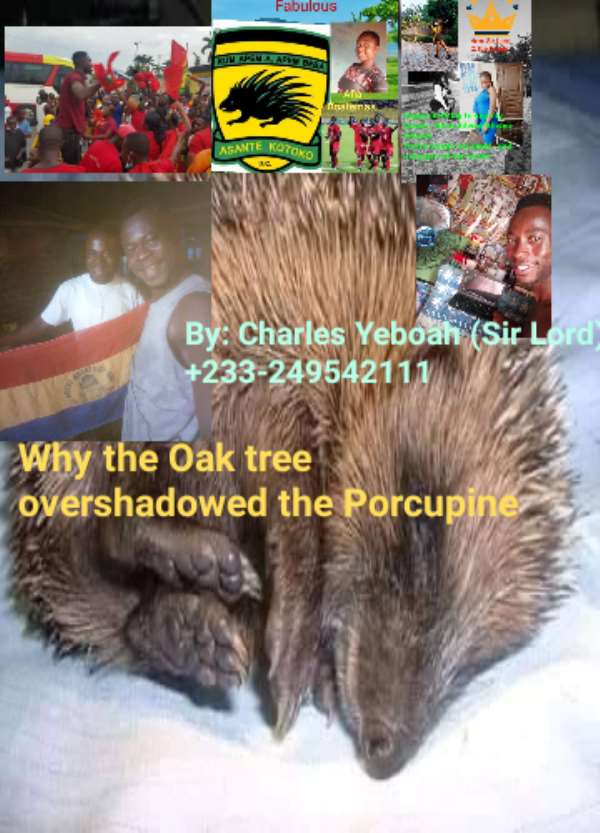 In a battle for a plot of land that holds water for all yearlong sustainability, the Oak tree fought with the Porcupine warriors at the banks of river Goka.

Prior to the encounter which bestows the winner an unchallenged spot by the river Goka, the lead man or otherwise the Coach of the Porcupine warriors was counseled by a good Seer not to look up in the skies either for supplication to the good Heavens or seeing a bird that flew above.

This coach, an alien to the land of the Porcupines, never believed in the customs of his hosts, and belittled the sagely counsel of the revered Seer.

And as if he was on a mission to lead his charges against the Seer's word instead of the serious business he was about - to ward off the Oak tree, the Coach kept his gaze in the skies every second or less, as it seemed. And no one knew from whence it came, even as it was in the spring and flowers sprout anew, a dry silk from a ripe flower atop the Oak tree fell in the eye of the Coach.

The Coach partially lost his sight, and he never saw the best of the Porcupine warriors to lead in the attack.

Before twilight, those who believed in the winnability of the Porcupine warriors were let down by the Coach.

Tried as they may, the beasts with quills did little to pierce through the roots of the Oak tree in an attempt to toppling it. In the end, the Oak tree overshadowed the Porcupine warriors, who retreated to the muddy side of the river Goka where the waters was not abundant and clean.

Today as we speak, the Oak tree is sitting on the land unrivalled. If not for any miraculous change, this hated enemy of the Porcupine warriors will enjoy the wholesome waters of the river Goka till next drought.

What will be your reaction if you were having your heart at the camp of the Porcupine warriors and you were forced to sleep on empty stomach owing to this poor-judgement-induced defeat ? Many will say: _"the coach must go."_

And indeed, the Coach Mariano Barreto who led Kumasi Asante Kotoko yesterday must be sacked. He let we the fans down. His selection is the least we expected for this super clash against Accra Hearts of Oak. If he is not aware, we Kotoko fans can accept defeats in any competition against any other team, but not when we lose to our sworn rivals Accra Hearts of Oak as it did happen yesterday, the black Sunday of 27th June, 2021.