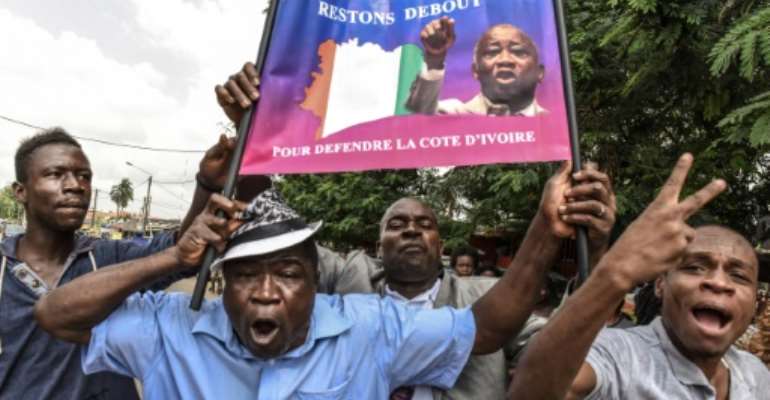 Gbagbo supporters in Abidjan celebrate his acquittal by the ICC in January 2019. By ISSOUF SANOGO (AFP)

Former Ivory Coast president Laurent Gbagbo is scheduled to arrive home on Thursday after being cleared of crimes against humanity for violence following the country's 2010 election.

Here is a timeline of the case since the disputed vote.

A presidential election finally takes place in Ivory Coast in 2010 after six postponements since 2005.

In 2011, after four months of tension and unsuccessful mediation efforts, forces loyal to Ouattara, made up of ex-rebels from the north, win control of much of the country.

French and UN soldiers deploy in the economic capital Abidjan to prevent the use of heavy weapons.

After 10 days of fighting in the city, Gbagbo is arrested by Ouattara's troops. More than 3,000 people die during the crisis.

Gbagbo is transferred to the International Criminal Court in The Hague in November, and in 2014 he is joined by his close associate Charles Ble Goude.

The trial of both men begins on January 28, 2016, making Gbagbo the first former head of state to stand trial in The Hague.

Gbagbo and Ble Goude are accused of four counts of crimes against humanity over the 2010-11 bloodshed. They plead not guilty.

Simone Gbagbo, the former first lady, also stands trial in Abidjan and is jailed. But in 2018 Ouattara amnesties her along with some 800 people in a spirit of national reconciliation.

In a stunning blow to the war crimes tribunal, judges at The Hague in January 2019 acquit Gbagbo and order his immediate release, and also that of Ble Goude.

Belgium agrees to host Gbagbo after he is released under strict conditions, including his return to court for a prosecution appeal against his acquittal.

The ICC in May 2020 announces Gbagbo is permitted to leave Belgium under certain conditions as he insists he will return to Ivory Coast.

Technically he could be jailed on his return, having been sentenced in absentia to a 20-year term for "looting" the local branch of the Central Bank of the West African States during the 2010 crisis.

Ahead of the presidential election in October, Ivory Coast's constitutional court rejects some 40 candidacies, including Gbagbo's. Ouattara wins the vote.

Gbagbo's Ivorian Popular Front party returns to the ballot papers in legislative elections in March 2021. It had boycotted all votes since his ICC arrest. It gets less than two percent of the vote.

The ICC on March 31 upholds Gbagbo's acquittal on crimes against humanity.

On June 9, after weeks negotiating details with a government keen to avoid unrest, Gbagbo sets the afternoon of June 17 for his return.