Leadership: A Desperate Medicine-man Always Have The Cure For All Ailments 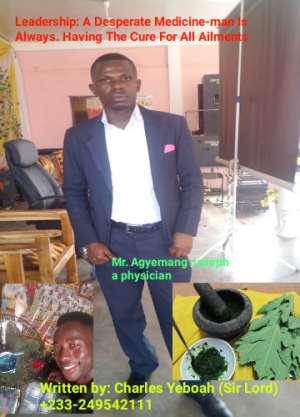 One day Mr. Agyemang paid a visit to his hometown, Goka, and the first unsightly scene that welcomed him to his sorrow was his now deformed former classmate.

As a physician now at the Chiraa Maternity Home, Mr. Agyemang hardly gets time to visit his nativity, and this his old school mate, it'd taken a decade and seven years before seeing him for the first time. He was wearing a swollen face which was not caused by beatings as suffers boxers, or stings of the bees, but the fearful symptoms from the deformity of his kidney.

Moved beyond pity and tears, Mr. Agyemang enquired from this his once handsome friend what occasioned his sorry plight. To which he was answered that he started deteriorating in his health when he purchased some concoction from an apothecary or a medicine-man which it was believed to be the magic cure for every ailment, and can also make him stronger in bed. After finishing one bottle of the phial or medicine, then he fell into swoon, comatose, and was awaken at the hospital weeks after. The doctors told him he'd developed kidney problem from the toxified substance he consumed. Hence his hapless looks today.

Mr. Agyemang took this opportunity to educate his compatriots who fell on every thing marketed to them as medicine. Telling them the deadly ramifications from unregulated medicine is as seen in his friend's, who died not long ago after the physician met him.

He then added that, since _a desperate medicine-man is always having the cure for all ailments,_ they should buy their cures from accredited medicine sellers, not quack doctors and conmen who prey on the gullibility of others.

When you get into trouble, you'll have all people proffering solutions. Be careful you're not used as a guinea pig for one's laboratory text.

If you're a leader, listen to all counselling from all class of people, pore and decipher which one is best applicable, or else, out of desperation, you'll sink your empire, and leave a bad legacy for present and posterity.

_This story was sponsored by Mr. Agyemang Joseph from Goka._

Voice Of The Lord Ministry