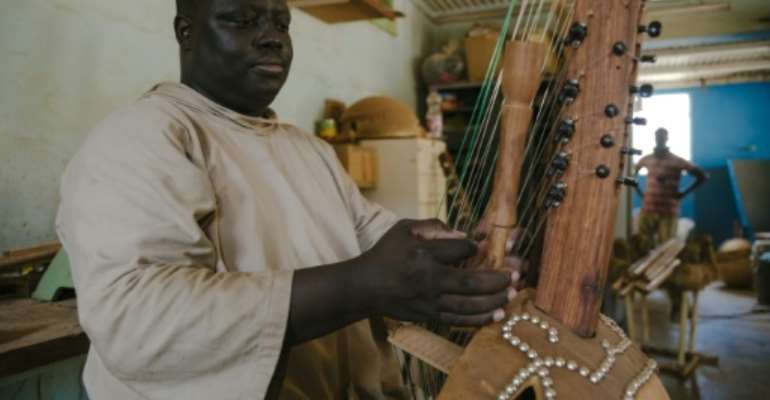 Long-necked kora harps are made with a calabash gourd as the soundbox. By CARMEN ABD ALI (AFP)

Monks in blue-grey habits lift their hands in supplication before breaking into a chant accompanied by the singsong twang of the kora, a traditional West African harp.

It is mid-afternoon prayer in the abbey of Keur Moussa, just east of Senegal's capital Dakar, a tranquil 25-hectare complex filled with fruit trees and herb gardens -- and famed for its relationship with the kora.

Dozens of monks are singing in a modernist church under a red-and-black mural of the nativity and crucifixion in which Jesus is represented as an African.

Here, seven times a day, Benedictine friars sing the glories of God to the sound of the 21-string kora.

In the monastery's workshop, luthier-monks also craft koras that are in high demand among professional musicians.

Monks at Keur Moussa sing accompanied by the kora instead of an organ. By CARMEN ABD ALI (AFP)

Throughout the mostly-Muslim surrounding region, and the wider Catholic world, Keur Moussa abbey is renowned for its harps and their contribution to worship.

"This is an instrument that allows the word of God to flourish," says Father Olivier-Marie Sarr, the abbot.

Standing in the shaded cloisters behind the church, a burnished-gold cross around his neck, the 45-year-old explains that using local culture brings worshippers closer to God.

"The kora is like a bridge," Father Olivier says. "It helps us to transcend something, to elevate the soul".

'Part of our worship'

Koras have long been the instrument of choice for the traditional West African singers, storytellers and oral historians known as "griots".

Plucked with two hands, the delicate and long-necked kora has a sound box made of a calabash gourd with a cowhide stretched across it.

The monastery at Keur Moussa was set up in 1963 and quickly became associated with the kora. By CARMEN ABD ALI (AFP)

Father Olivier recounts how the French Benedictines who founded Keur Moussa in 1963 were amazed at the sound of the instrument, which they found could replace the organ when performing Gregorian chant.

Today, the instruments produced in Keur Moussa have become a point of reference for touring musicians and prominent members of griot families.

"Koras from Keur Moussa are to be found in all continents," says Brother Marie Firmin, proudly.

He and another monk produce between 40 to 50 koras a year in a small workshop dotted with half-finished instruments, woodworking equipment and religious iconography.

Cowhide is strung across the gourd to form the kora's soundbox. By CARMEN ABD ALI (AFP)

A layman is also employed to continue essential work when the monks are called to church.

They do good business. Kora sales account for around a third of the monastery's revenues, according to the monks, with the highest-quality models fetching around 1,000 euros ($1,200).

Brother Marie Firmin says they sell many instruments in Europe, but that other African monasteries are also big buyers.

"It is part of our worship," he says.

Most of the roughly 35 monks at Keur Moussa are Senegalese, part of a small Christian minority in a country where over 95 percent of people are Muslim.

But there are also friars from across French-speaking Africa, including Guinea, Togo, Benin, Cameroon and Gabon.

Around 35 monks live at the Keur Moussa monastery, some from across French-speaking Africa. By CARMEN ABD ALI (AFP)

"Monastic life is a calling," says Brother Bernard, a Cameroonian who studied in Rome for years.

But he explains that the choice of monastery is down to personal preference, and often influenced by magazines and publications that circulate in the monastic world.

Keur Moussa is renowned among Catholic clergy for its music.

"It was because of the music that I decided to come," says Brother Bernard, who speaks in the same hushed tone as many of the other monks.

Father Olivier, the abbot, cast the kora as the symbol of Keur Moussa, whose "beautiful" music accompanies the unrelenting routine of monastic life.

"It allows us to build a certain harmony between ourselves, and harmony with God as well," he said.