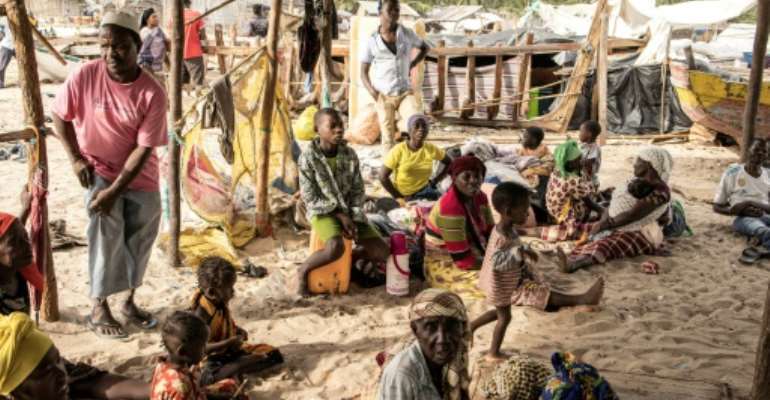 People gather under a makeshift displacement shelter as they arrive at Paquitequete beach in Pemba after fleeing Palma. More arrive on an almost daily basis.. By JOHN WESSELS (AFP)

A year ago Atija Camacho lived with her husband and their 10 children in a small three-roomed house in Paquitequete, a poor seaside neighbourhood in Mozambique's Pemba city.

Today, more than 40 people reside in her home.

As a jihadist insurgency escalated last year, Camacho offered shelter to more than 30 persons she found destitute at a nearby beach where dozens arrive almost daily in rickety vessels, fleeing the violence up north.

More than 700,000 people have abandoned their homes since the violence started three-and-half years ago — 64,000 of them in just the last two months since a major attack on Palma town.

At least eight in 10 displaced Mozambicans move in with family, friends or strangers, according to humanitarian aid agencies.

A woman lays out a cloth for her grandchild at a makeshift displacement shelter along the Paquitequete beach in Pemba. By JOHN WESSELS (AFP)

On arrival in Pemba, the capital of Cabo Delgado province, the displaced people look for relatives or just stay on the beach, waiting for the government to move them to temporary shelters — a process that can take days.

"I saw some people still at the beach, in the open. I felt sorry for them," said the soft-spoken Camacho, 35, explaining how she ended up with the crowd staying under her roof.

A few metres (yards) away across the sandy yard of the house, one of her "guests", Awa Njane, 19, sat on a small stool preparing dinner on an open coal fire.

Njane fled Quissanga in October after her father was captured by militants and beheaded. She does not know where her husband or mother are.

She is profusely thankful to Camacho, her new "mother" who gave shelter to her and her baby son, then a month old, after they slept rough for a week at the dirty beach.

Frying small pieces of sardines, far from enough to feed the 43 people in Camacho's household, she said, "It's very difficult to get food."

The insurgency has pushed many to the brink.

"Displaced people are in urgent need of assistance now and for the next following months," he said, appealing for $104 million (85.3 million euros) in funding to feed 950,000 people — the displaced as well as their host families — until year end.

Lucas added that "83 percent of (internally displaced people) are living with host families and the pressure is increasing on these communities."

Camacho has added three extra rooms to accommodate her guests, but that is still not enough.

"People sleep everywhere, including here," she said, pointing at the veranda of her house — measuring barely 40 square metres (430 square feet) and built with metal sheets and bamboo plastered with mud.

The UN International Organization for Migration (IOM) is on the frontline, receiving heavily traumatised survivors. Its staff offer mental health care not only for the displaced, but also for their hosts — some of whom even struggle to look after themselves.

"Host communities have very limited resources but in spite of that they are happy to share, there is a sense of humanity that unites them," said IOM's mental health expert in Pemba, Derya Ferhat.

A woman carries her belongings off a boat as she arrives at Paquitequete beach in Pemba after fleeing Palma by boat with forty nine other people. By JOHN WESSELS (AFP)

"That is an amazing thing about Mozambicans, they are very generous," she added. "People are really happy to support each other".

Nevertheless, pressure from the mass displacements is felt across the board and the health care systems are also buckling under the strain.

The International Committee of the Red Cross (ICRC) is on a drive to expand and upgrade the dilapidated health care centres.

It recently erected a new wing at a dilapidated clinic in Pemba's Ingonane township.

"There is a lot of pressure on existing infrastructure," said Raoul Bittel, Pemba's ICRC head of operations.

"It was not enough for the residents and now with the displacement... (it's) challenging," said Emilio Mashant, ICRC's health care programme manager.

"Health centres are overcrowded... nurses are burned out," he lamented.

Families in Pemba, hoping to evacuate by boat to Palma in April. By Alfredo Zuniga (AFP)

Although the region has recorded a low number of infections, the Covid pandemic has added to the health woes.

"This is really a nightmare," to try get desperately poor people to even buy a mask, Mashant said.

The provincial government authorities did not respond to AFP requests for interviews.

Adriano Nuvunga, head of Mozambique's Centre for Democracy and Development, blames "governance failure" for the huge numbers of people living off host families.

"The state is failing, and that is fuelling the feeling of hopelessness among the displaced," Nuvunga said, adding that despair makes people vulnerable to recruitment into the ranks of the extremists, who have made links with the Islamic State group.

Recent data collected by the US conflict tracker ACLED shows the conflict has claimed more than 2,800 lives, half of them civilians.