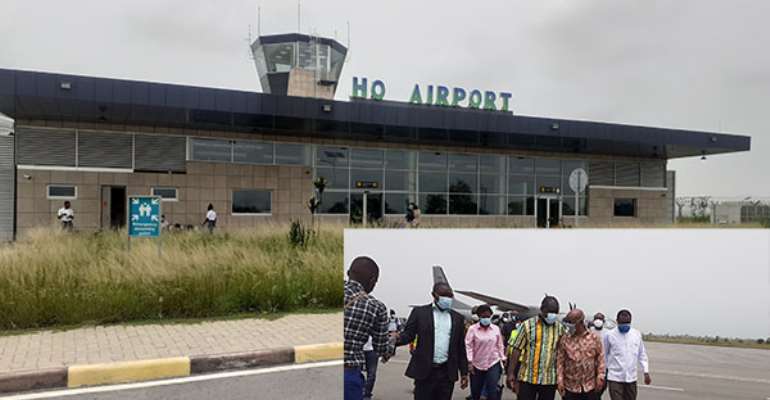 The Minister, who disclosed this recently at a familiarisation tour of the facility, said that Africa World Airlines (AWA), a private airline, would begin flying the Ho-Accra route by mid-April this year.

The airport, constructed by Amandi Holdings Limited, is endowed with 1,900 metres of runway, a control tower, 1,150 seating-capacity for waiting passengers, an ultramodern airbus terminal, an automatic fire-detection system, gadgets for communications, weather analysis and runway fixtures.

The Minister said the $25million-dollar project, since its completion and commissioning in 2018, has been left unused because the country did not have a wholly-owned airline to fly that route.

“Government and the Ghana Airport Company Limited, has brainstormed with various private airlines and relevant stakeholders, and has finally succeeded, in making the airport operational, with African World Airline (AWA) taking the bold step of pioneering the operations”, he noted.

Mr. Asiamah charged the chiefs and people of the region to patronise the flights so as to make a strong case for an eventual expansion of its facilities.

He also appealed to the chiefs and people to protect the airport from encroachment, so as to not stifle plans for its future expansion.

He additionally warned that persons who had built structures on airport lands in the country would have such structures demolished.

The Avafiaga of Ho, Togbe Adzi Lakle Howusu XII, speaking on behalf of the Asogli State, thanked God, for what he described as the “long awaited opening of the airport.”

He also thanked stakeholders in general and President Akufo-Addo, in particular, for ensuring that the airport became operational.

He was hopeful that in due course, international flights to neighbouring countries, as well as inland flights to Tamale, Kumasi and Takoradi from the airport would come into fruition.

Volta Regional Minister, Dr. Archibald Yao Letsa, was very excited about the development, and appealed to tourists and investors to make good use of the Ho airport.