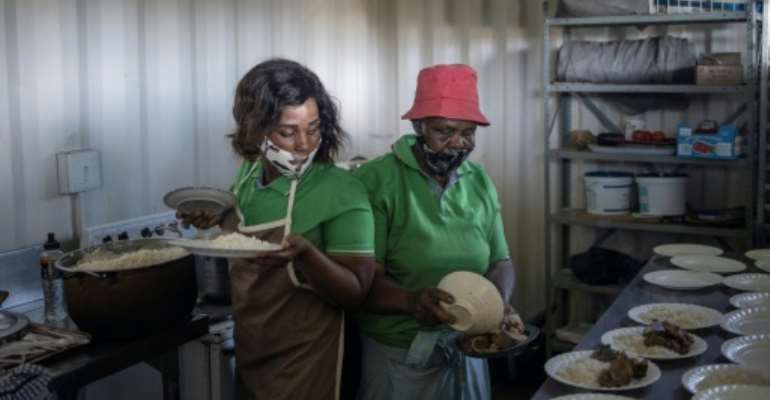 Millions of people in South Africa have slipped into food insecurity since the coronavirus pandemic started. By Michele Spatari (AFP)

Left jobless by the pandemic and a fire that destroyed her sewing machine, Nomaqhawe Dlomo polished off a hefty portion of maize meal and vegetables dished out at a community centre in a Johannesburg township.

Days earlier, the cabbage and pumpkin on her plate were strewn in a pile of discards from South Africa's largest fresh produce market, waiting to be incinerated.

Around one third of food produced in South Africa ends up in landfill, according to the World Wide Fund for Nature, amounting to around 10 million tonnes of waste per year.

"People throw away food that we can make use of," said community centre manager Khetiwe Mkhalithi, who has seen an increase in those needing to be fed since coronavirus hit.

Charities have long been lobbying the government to revisit food redistribution laws in a country where more than 11 million people went to bed on an empty stomach even before the pandemic.

"So a lot of farmers, retailers and hotels don't want to give away their wasted food because they fear litigation."

But the economic ravages from almost a year of rolling coronavirus restrictions have booted food producers into action.

Many more are now reaching out to soup kitchens and feeding schemes with much-needed donations.

"We are building relationships... so that we can do this on a more formal basis rather than skirting from the outside," Van Linge said.

After convincing the seller to donate the lot, Van Linge ushered in a small team of volunteers to lug out the pallets before market authorities could intervene.

Usually reluctant, traders have been more forthcoming since coronavirus hit, despite the risk of being fined for giving away food deemed "unfit for consumption".

Van Linge is careful not to cause trouble.

"Let's clean the loose leaves off before loading," she instructed. "If there are cabbage leaves flying everywhere it just attracts more attention." 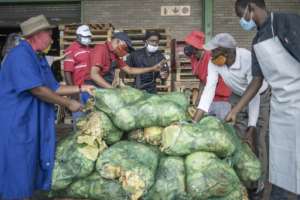 Sellers often have to be convinced to donate apparently gone-off produce for fear of litigation. By Michele Spatari (AFP)

Forklifts in the background noisily crunched into crates of bruised avocadoes and softened tomatoes, dragging them to a truck shortly headed to a dumpsite.

Nosh has rescued around 880 tonnes of produce in the past 10 months, around four times more than over the whole of 2019.

While the cabbage was being loaded, Van Linge's phone lit up with a message from a wholesaler offering sweet potatoes past their sell-by date.

A school also reached out to donate dozens of untouched lunch packs.

Produce from the market is driven to a nearby warehouse and sorted by volunteer chefs.

They removed the rotting cabbage exteriors and rinsed the heads underneath, still firm and white.

"Normally people regard a cabbage like this as rotten," said Jane Gqozo, 43, a former restaurant worker who now manages the warehouse.

"They don't know you can rescue these vegetables and give them to someone else."

'Nothing to take home'

Back at the community centre, pensioners attended a late morning church service as large pots of maize meal simmered over glowing coals.

The site usually hosts a handful of elderly township dwellers in the mornings and afternoon activities for children after school.

But as lunch hour rolled around, working-age men and women walked through the gates, babies in tow, seeking a meal. 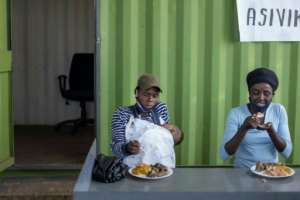 People often bring babies when coming to seek food at the Sincedeni Elderly Centre in Johannesburg. By Michele Spatari (AFP)

"Because there is hunger during this Covid time the whole community comes here," Mkhalithi said, adding that these days up to 1,500 people can show up at the centre in a single day.

That demand would have been impossible to meet without donations from a food waste redistribution network set up in April, which has since provided close to 1.5 million meals in and around Johannesburg.

"Most are people who have lost their jobs," said Mkhalithi. "They have got nothing to take home."

A survey of hunger during the pandemic found that 47 percent of South African households ran out of money to buy food last April, the first month of lockdown.

Oxfam meanwhile estimates that over two million people have slipped into food insecurity since the outbreak started.

"Those are the people who were most struggling to feed their families in the first place."

Dlomo, 39, was one of many at the centre who became solely reliant on soup kitchens last year.

Her husband lost his job at a fast food joint during lockdown, when neighbours also stopped coming to visit her for odd sewing jobs.

The couple had already used up their meagre savings when a fire razed their makeshift home in September.

"Here there is something I can put on the table for my children," said Dlomo. "I'm desperate for food and a shelter."