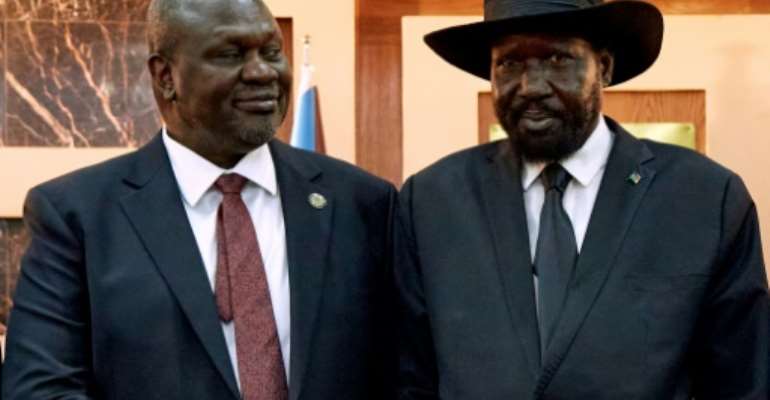 On the eve of its first anniversary, South Sudan's unity government is in trouble, with the country's fragile peace process in doubt and old rivalries again threatening a return to war.

President Salva Kiir and Vice President Riek Machar, for years on opposing sides of the battlefield, formed a coalition government on February 22, 2020 after nearly a year of delay and haggling along with international pressure.

The agreement to share power was born from a truce that ended five years of bloodshed in the world's newest country that cost nearly 400,000 lives and drove four million people from their homes.

That ceasefire still largely holds -- but it is being sorely tested, observers say.

Apart from forming a government in Juba, almost none of the other provisions of the peace accord signed by Kiir and Machar have been honoured a year after the pair shook hands.

National parliament has not convened, contested ministerial posts remain unfilled, and Kiir and Machar's troops have not unified into a single army -- a critical safeguard against another outbreak of fighting.

"With both men continuing to command their own separate forces, the journey back to war could be short," said the International Crisis Group in a February report.

The peace process has drifted as South Sudan reels from economic crisis, brutal ethnic violence, an armed insurgency, and its worst hunger crisis since declaring independence from Sudan in 2011. 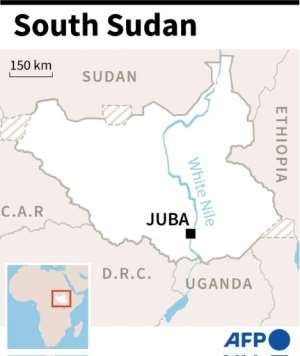 Government funding for the process has been in short supply.

Hundreds of officials in Juba involved with the peace process were thrown out of hotels in February over $50 million in unpaid bills. Training sites for the new army promised under the accords, meanwhile, have suffered from dire shortages of food, medicine and uniforms.

The situation is so bad at these garrisons for government and rebel troops that many have deserted, disillusioned with the reconciliation exercise.

Col. James Kor, the deputy instructor at a camp in Rajaf, said 26 troops there died from hunger in recent months.

"You cannot keep troops there when they're starving. These are human beings. If they see there's no food, they'll desert," said Major General Olaw Adhiang, co-chair of the Joint Transitional Security Committee, which oversees the army unification process.

Abraham Magaya Aleu, a government soldier in Rajaf, told AFP he received about 1,000 pounds ($1.70, 1.40 euros) a month -- a pittance even before runaway inflation took hold in South Sudan.

"We don't have any medicine. I have diarrhoea and typhoid but when I go to the clinic there's nothing. We eat plain rice and nothing else," said Aleu, who has spent more than a year idling at Rajaf in misery.

A high-level delegation that visited several camps this month reported "suffering" among cadets and "no progress" on even the earliest stages of training, more than 18 months after the army was supposed to deploy.

"Protracted delays and passing of time without progress is detrimental to lasting peace in South Sudan," said Maj. Gen. Charles Tai Gituai, the interim chairman of the RJMEC, which monitors the implementation of the peace process.

Open warfare rages in the nation's southern Equatoria region, meanwhile, where government forces are fighting rebels who refused to sign onto the peace process.

Elsewhere, violent clashes between heavily-armed ethnic rivals left hundreds dead as elites in Juba squabbled over the appointment of governors in the states, leaving them open to lawlessness. 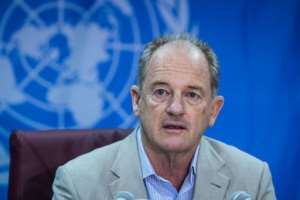 UN special envoy for South Sudan David Shearer has been concerned over the slow implementation of the peace agreement. By Akuot CHOL (AFP)

"Our fear is that the slow pace of reform as set out in the peace agreement will deteriorate further as national actors meddle and fuel local-level violence," Shearer said recently.

Some within Machar's ranks have turned on him in the past year, accusing the former rebel leader of gifting key positions to family members, and accepting a bad deal that weakened their position to negotiate.

Kiir has exploited his stronger position in government, meanwhile, to lure opposition defectors to his camp, raising the political temperature with Machar.

"Keeping the peace between Kiir and Machar is the top short-term priority for the guarantors of South Sudan's peace deal, although it will be no easy task given their bitter rivalry," the ICG said.

As their leaders plot and scheme, more than seven million South Sudanese -- about 60 percent of the population -- are going hungry.

The World Food Programme said this week some parts of the country were already suffering famine-like deprivation while floods have ruined harvests and livelihoods, forcing half a million to flee. 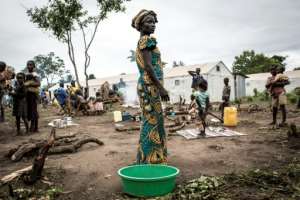 Parts of South Sudan -- pictured here in 2019 in a refugee camp -- are suffering famine-like deprivation, according to the World Food Programme. By JOHN WESSELS (AFP)

"This is not the first time we have called on the same leaders to fulfil their responsibility to our country and the citizens of this nation," reads a desperate appeal from church leaders and civil society groups this month.

"Unfortunately, these calls have not yielded any meaningful change to the ongoing crisis."