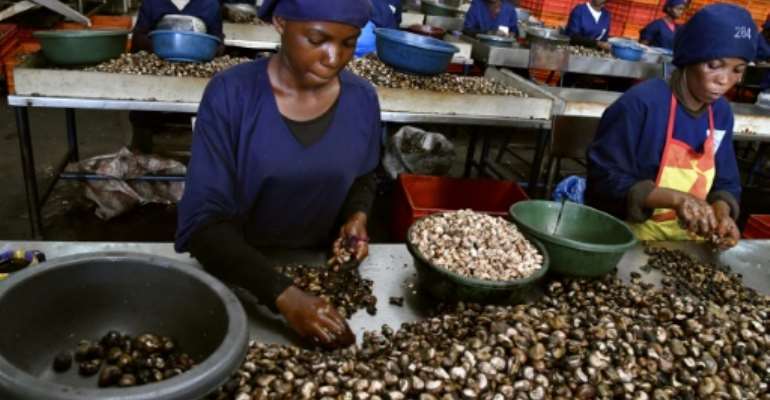 Armed with strict laws and an awareness campaign for planters, Ivory Coast is fighting the smuggling of cashew nuts. By ISSOUF SANOGO (AFP/File)

Cashews are big business in Ivory Coast, the world's leading producer, and the country is waging an intensifying campaign to stop smuggling of the nut known there as "grey gold".

The West African nation has strengthened its laws to punish those caught sneaking the nuts over its borders and is trying to make growers aware of the damage the illegal trade is having on the economy.

Between 150,000 and 200,000 tonnes of Ivory Coast's cashews were illicitly sold last year to neighbouring countries, including Ghana and Burkina Faso, up from nearly 100,000 tonnes the previous year, according to official figures.

"Each year, the leakage of production is a great concern," said Adama Coulibaly, director of the Ivorian Cotton-Cashew Council, which manages the sector.

"We try to do everything possible to limit the departure of our wealth to neighbouring (countries)," he told AFP.

In 2020, a government ordinance repealed and replaced a previous one from 2018, which was deemed "ineffective" to fight against contraband in both cashew nuts and cocoa, of which Ivory Coast is also the world's top exporter.

"We have more room to manoeuvre against those who harm the economy," Coulibaly said, "because every kilogramme (2.2 pounds) that gets out is a loss for the national economy and for the sector."

People convicted of smuggling now risk up to 10 years in prison, a fine of 50 million CFA francs ($92,000) and the seizure of their harvest.

"We must hit hard, where it hurts, in the wallets" of those behind the illegal trade, said Coulibaly, who believes that the majority of smuggling barons are based in neighbouring countries.

Without disputing the value of new punitive measures, many specialists argue that a good price paid to growers for a product of higher quality would constitute the best way to prevent illicit trade.

The kernel of the cashew is widely used in cooking and in cosmetics, while the resin from its shell is suitable for a surprising range of industrial uses. By ISSOUF SANOGO (AFP/File)

"There's a well-organised network," said a grower from Ferkessedougou, the country's main cashew region in the far north, asking not to be named as he disclosed cross-border dealings with Burkina Faso.

The sacks of cashews are transported along the many tracks that cross the porous border.

"Ivory Coast is paying today for the bad quality of its production," argued Klotioloma Soro, coordinator of the National Agency of Support to Rural Development.

"Exporters offered (the growers) purchase prices lower than those paid in their neighbours like Ghana, where the quality is better."

A public awareness campaign is at the heart of efforts to tackle the smugglers.

Last week in the northern regions the government instructed "services responsible for protecting the borders... to take all measures to tackle the loss of the nuts by land borders."

The senior government official in these regions, the prefect, now runs an "awareness committee" comprising agricultural buyers, police and paramilitary gendarmes, along with soldiers, with instructions to crack down on illicit activities.

Cashews are sometimes known as "grey gold" as they are big business in Ivory Coast. By Mohamed Bio (AFP/File)

Apart from illegal smuggling, the 350,000 producers in the Ivorian cashew nut sector also face a major challenge to transform their business.

While Africa accounts for about 90 percent of global cashew production, only 10 percent of that output is locally processed for derivative products.

South America and especially Asia process not only their own cashews but also those imported from Africa -- often re-exporting them afterwards.

The kernel of the nut is widely used in cooking and in cosmetics, while the resin from its shell is suitable for a surprising range of industrial uses. The shell of the raw nut even contains a liquid used as a fluid for aircraft braking systems.

You have no authority to banish, kill anyone for being gay; ...
28 minutes ago