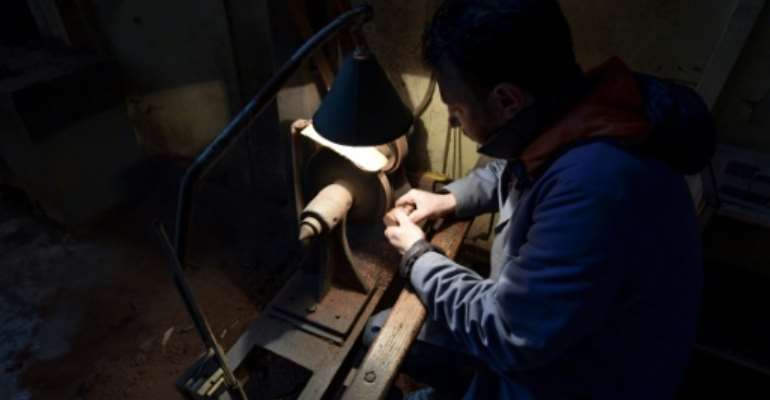 Anis Bouchnak carves a wood pipe at his workshop in the Tunisian coastal town of Tabarka, a craft passed down by his grandfather and father. By FETHI BELAID (AFP)

"I am proud to be the only pipe-maker in Tunisia," said the craftsman, his hands roughened from his trade.

"But frankly, I would have liked to have competition, because this would have motivated me to progress."

The Bouchnak family workshop was established half a century ago in Tabarka, a northwestern tourist town nestled in verdant hills that plunge towards the Mediterranean.

In 1968, Anis's grandfather Chedly Bouchnak travelled to Switzerland and brought back a rasp, a drill and other woodworking tools to transform briar wood into smoking pipes.

But French pipe-makers refused to teach him their craft.

Determined, Chedly spied through the window of a workshop in Saint-Claude -- the French city considered the capital of briar pipes -- to learn the secrets of their manufacture. 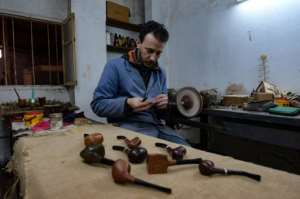 Anis Bouchnak and some of the wood pipes he has carved; the Bouchnak family workshop was established half a century ago. By FETHI BELAID (AFP)

Over the years, Bouchnak pipes have gained a certain renown.

But 37-year-old Anis, who had been living in France since he was a child and worked in the restaurant business, never imagined he would take up the mantle.

Then in 2011, after the death of both his grandfather and father, he returned to Tunisia and decided to reopen the workshop.

'Passing on the torch'

A Tunisian pipe collector "passed on to me the passion for this work and showed me the future prospects of this trade", he told AFP. 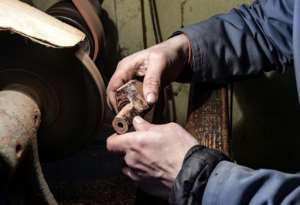 Connoisseurs appreciate briar wood for its heat tolerance and neutral smell, which allows the smoker to better savour the aromas of the tobacco. By FETHI BELAID (AFP)

He learnt the ropes from a master pipe-maker employed by his grandfather, who died last year.

Now, Bouchnak makes pipes in his own original style -- while not sacrificing functionality.

He is the only producer in Tunisia, and among the rare few in the region, to continue to make the pipes by hand.

The mountainous Kroumirie area in northwestern Tunisia is known for its briar -- harvested from the root of the Erica arborea shrub, native to the Mediterranean basin and long used in French pipe factories.

Connoisseurs appreciate briar wood for its heat tolerance and neutral smell, which allows the smoker to better savour the aromas of the tobacco. 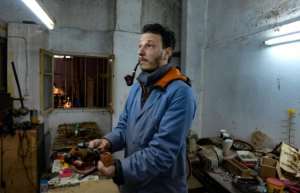 Anis Bouchnak learnt the pipe-making skills from an expert employed by his grandfather, who died last year. By FETHI BELAID (AFP)

Bouchnak said his early customers -- academics, lawyers, doctors and politicians -- had made way for a clientele of collectors and diplomats "looking for something original".

"It's a whole market that's mine," he said. "But it's a burden to be the only pipe-maker, because I'm responsible for carrying on this craft and passing the torch on to someone else."

Bouchnak has taken on two apprentices and said there was plenty of work.

"Everything I make is sold straightaway."

While many Tunisian artisans have suffered from the collapse in tourism due to the coronavirus pandemic, Bouchnak said he continued to get orders by offering "something other than the camel, the palm tree and the carpet".

He said he found inspiration in the tin-roofed workshop in a courtyard of the family home. 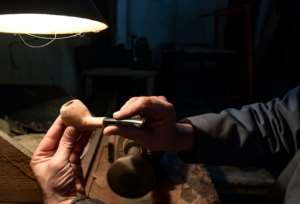 While many Tunisian artisans have suffered from the collapse in tourism due to the coronavirus pandemic, Bouchnak said he continues to be busy. By FETHI BELAID (AFP)

"With all these old machines, I have the impression of going back in time and... of preserving the traditional way of making pipes, like my father and grandfather before me," he said.

"For me, it's a workshop-cum-museum that has a soul."

His work starts with choosing a piece of briar burl -- the blocks cut from the shrub root structure -- from a room whose floor is covered by the family treasure: burls that have been drying sometimes for 20 years.

"I have enough to last me another 10 years" making two pipes a day, Bouchnak said.

The burl must first be cut, then boiled for 12 hours before it is left to dry for four to 20 years, its quality improving with age.

The artisan then drills the wood and shapes it with rasps and files before sanding it down.

"I could work with new machinery, it would make my job easier," Bouchnak said.

"But I prefer to continue to work by hand, because there is a satisfaction in doing something that comes from the spirit and the hands."