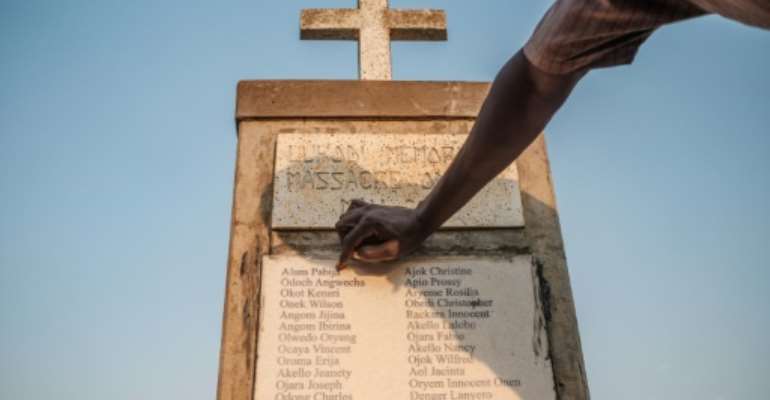 A memorial for victims of of an LRA massacre in Lukodi, Uganda. By Sumy Sadurni (AFP)

One of Africa's longest-surviving rebel groups, the Lord's Resistance Army (LRA) has terrorised parts of central Africa for 35 years.

Its leaders are violent pariahs and fugitives from international justice, who were once hunted by US special forces and African armies.

Founder Joseph Kony remains on the loose, but other key commanders have died or turned themselves in, among them Dominic Ongwen who was found guilty on Thursday of war crimes and crimes against humanity at the International Criminal Court (ICC) in The Hague.

The LRA and Museveni

The LRA began as a rebellion against the takeover of Uganda by rebel leader Yoweri Museveni in 1986. This followed in a tradition of armed movements led by spiritual leaders among the northern Acholi people.

He claimed he would liberate Uganda from Museveni and establish a state ruled according to his own version of the 10 commandments.

He later added an 11th, banning the riding of bicycles with offenders punished with amputation.

When the Acholi failed to embrace his rebellion Kony turned on them, attacking civilians, abducting women and children and massacring entire villages.

The LRA became notorious for its abductions, with tens of thousands kidnapped over the years.

The LRA and the ICC

In 2005 the ICC unsealed arrest warrants against five top LRA leaders, including Kony and Ongwen, accusing them of war crimes and crimes against humanity.

The pressure of ICC attention contributed to Kony's turning up to peace talks the following year, the first time he had appeared in public in years. However, the talks collapsed and Kony took his rebels back to the bush.

Three of the five ICC indictees have since died. Ongwen surrendered in January 2015.

The 2005 warrants were the first issued by the court and came after Uganda asked the ICC to investigate the LRA case. In 2016, Ongwen's trial became the first involving the LRA.

The LRA and the US

A concerted campaign by activists in the US led former president Barack Obama to sign a law in 2010 that allowed the deployment of around 100 special forces to work with regional armies to hunt down Kony.

One of the groups, Invisible Children, went on to produce a video two years later called "Kony 2012" that went viral with 100 million views in a matter of days, raising awareness of the rebel group's activities and its fugitive leader.

The video's unexpected success -- and the vocal criticism that it also triggered -- resulted in the very public, naked, ranting breakdown of the group's founder and frontman Jason Russell.

That, plus the failure of their hashtags to stop Kony, meant the American clicktivists largely lost interest while Kony and the LRA continued their depredations.

In 2017, the US military announced it is wrapping up operations against the LRA, saying it has "been reduced to irrelevance".

The same year the Ugandan army began withdrawing its troops from the Central African Republic.

The rebels are not what they were. Estimated to number in the low hundreds, LRA groups are dispersed across parts of the Democratic Republic of Congo, Central African Republic, South Sudan and Sudan.

The US and the African Union have both designated the LRA as a terrorist group and the US has labelled Kony a "global terrorist" yet the LRA threat is both limited and local.

The LRA Crisis Tracker organisation says the group carried out 42 attacks in the past year, leaving 31 dead and 192 abducted, mainly in the remote DRC-CAR-South Sudan border areas.

This represents a 48 percent decline in attacks compared to the previous year.

Sack all underperforming security personnel – CFF Ghana to A...
11 minutes ago