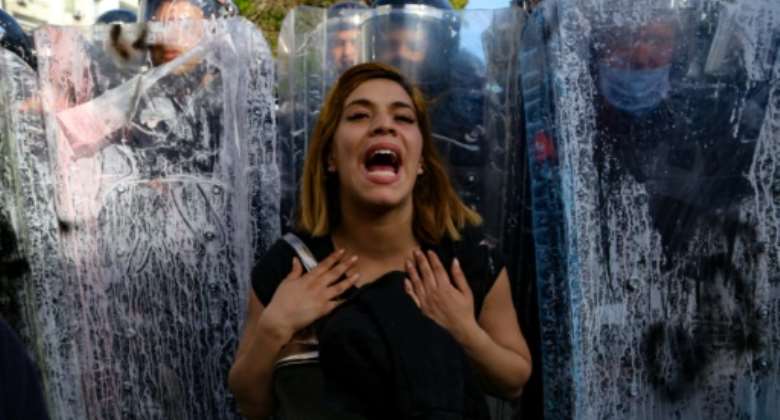 A Tunisian woman taking part in a demonstration in the capital Tunis on Saturday stands in front of police officers blocking access to the interior ministry. By ANIS MILI (AFP)

Hundreds of young people took to the streets of the Tunisian capital on Saturday to protest against police repression and demand the release of demonstrators detained in recent days.

The protesters marched from Tunis's central Human Rights Square to Habib Bourguiba Avenue, trying to make their way to the interior ministry, an AFP reporter said, but security forces blocked their path.

Denouncing what they say is police repression and government corruption, some demonstrators held signs that read, "Police everywhere, justice nowhere".

Some threw plastic water bottles at security forces, while others chanted slogans including "Down with police rule" and "Release the nation's sons (from detention)".

Mired in a political and economic crisis worsened by the Covid-19 pandemic, Tunisia has been rocked this month by a wave of social unrest, a decade after Arab Spring protests ousted the autocratic regime of Zine El Abidine Ben Ali.

Security forces have carried out mass arrests, including of minors, after more than a week of night-time riots and daytime protests against police repression, poverty, corruption and unemployment.

"The security forces are repressing us and want the return of a police state," protester Majdi Sliti, 33, told AFP on Saturday. "We will not accept this."

Amnesty International on Thursday called on Tunisian authorities to investigate the death of a young man who died after reportedly being hit by a tear gas canister during protests last week.

Tunisia has often been praised as a rare success story for its democratic transition after its 2011 revolution that sparked similar uprisings in the region.

But many Tunisians are angered at a political class seen as locked in power struggles and disconnected from the suffering of ordinary people, who are facing spiralling prices and steep unemployment.

The International Monetary Fund last week encouraged Tunisia to set up a reform plan to "bring economic imbalances back to a sustainable trajectory".