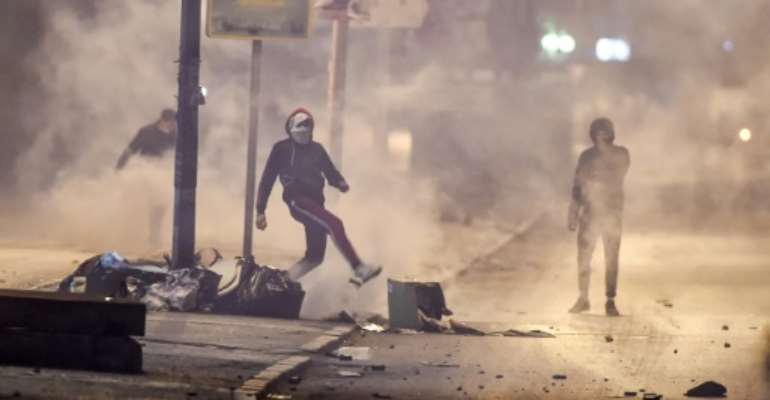 Tunisian protesters defy lockdown orders as they clash with security forces in the Ettadhamen suburb of Tunis. By FETHI BELAID (AFP)

Clashes broke out for a third consecutive evening Sunday in several Tunisian cities, pitting stone-throwing youths against security forces despite a tight lockdown to curb the spread of coronavirus.

In the working-class neighbourhood of Ettadhamen on the edge of the capital Tunis, young men hurled rocks at riot police who responded with volleys of tear gas.

Authorities said they had arrested dozens of young people during consecutive nights of disturbances in the capital and other cities, amid a nationwide anti-coronavirus lockdown imposed since Thursday -- a decade to the day since dictator Zine El Abidine Ben Ali fled from power.

But in Ettadhamen, there were no political slogans to be heard.

"These aren't protests, it's young people who are coming from nearby neighbourhoods to rob and entertain themselves," said 26-year-old resident Oussama.

"A protest would be during the day, faces visible."

Abdelmoneim, a waiter at a nearby cafe, said those in the street were "bored adolescents", but blamed the violence on the country's post-revolution political class.

"These delinquents are the result of their failure," the 28-year-old said. 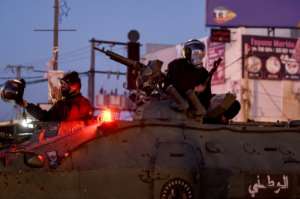 From nightfall, young people gathered again on the roofs of houses to lob stones and fireworks at police and national guard officers.

Sirens wailed as a police officer with a megaphone shouted "go home!"

Nearby, a young man filling his pockets with rocks told AFP: "These are for our enemies."

Interior ministry spokesman Khaled Hayouni said earlier Sunday that dozens of young people, mostly aged between 14 and 17, had been arrested after they took to the streets during previous evenings, to loot and vandalise shopfronts and cars.

Sousse, usually a magnet for foreign holidaymakers but hit hard by the pandemic, also saw rioting.

Tunisia had been under a night-time curfew even before the recent lockdown, a four-day measure meant to expire on Sunday at midnight.

A decade on from the revolution, many Tunisians are increasingly angered by poor public services and a political class that has repeatedly proved unable to govern coherently.

Tunisia has registered over 177,000 coronavirus cases, including over 5,600 deaths from the disease.

The health crisis and ensuing economic misery have pushed growing numbers of Tunisians to seek to leave the country.

In Ettadhamen on Sunday evening, waiter Abdelmoneim nervously dragged on a cigarette as youths fought police nearby.

He said he was determined to take a boat across the Mediterranean to Europe "as soon as possible, and never come back to this miserable place".

‘Jean Mensa’s refusal to testify an embarrassing stain on Gh...
18 minutes ago