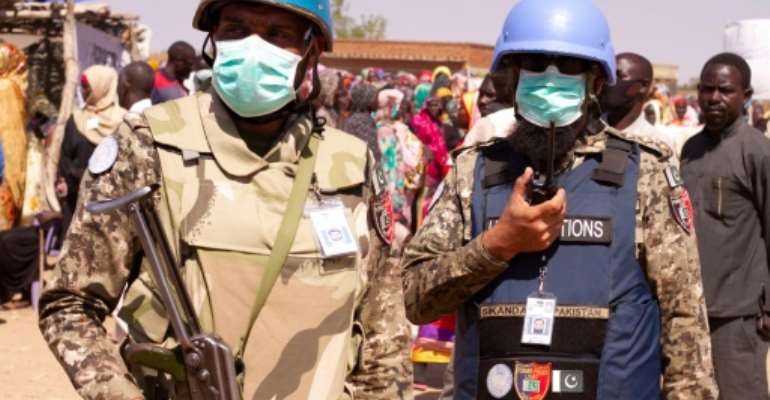 Members of the United Nations and African Union peacekeeping mission (UNAMID) look on as Sudanese internally displaced people stage a sit in to protest against the end of their mandate, in Kalma camp in Nyala, in late December. By - (AFP)

The violence has reportedly pitted the Massalit tribe against Arab nomads in El Geneina, the capital of West Darfur state, and quickly morphed into broader fighting involving armed militias in the area.

"The bloody events which are still ongoing since Saturday morning (have) also left ... 97 wounded."

It was not immediately clear why the fighting started.

Sudanese authorities have since Saturday imposed a state-wide curfew in West Darfur, while the Khartoum government dispatched a "high-profile" delegation to help contain the situation.

Citing the doctors' union, SUNA reported that casualties are expected to increase as the fighting continues.

The union's local branch also "called for the securing of health facilities" and urged transport be made available for medics to assist the wounded.

On December 31, the hybrid United Nations African Union Mission in Darfur (UNAMID) formally ended its operations in the region, 13 years after it came into being.

It plans a phased withdrawal of its approximately 8,000 armed and civilian personnel inside six months.

The Sudanese government "will take over responsibility for the protection of civilians" in Darfur, UNAMID said, as its mandate ended. 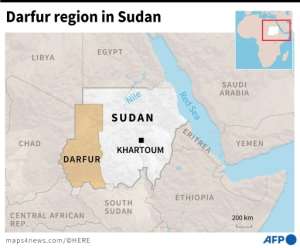 Also in late December, clashes in South Darfur state left at least 15 people dead and dozens wounded, prompting the government to send troops to the area.

The vast Darfur region was the scene of a bitter conflict that erupted in 2003, leaving around 300,000 people dead and 2.5 million displaced, according to the UN.

Back then, fighting erupted when ethnic minority rebels rose up against the Arab-dominated government in Khartoum, which responded by recruiting and arming a notorious Arab-dominated militia known as the Janjaweed.

The violence often centres on land and access to water.

Sudan is undergoing a rocky political transitional after the ouster of long-time president Omar al-Bashir in April 2019 triggered by mass protests against his rule.

Bashir, who is currently in custody in Khartoum, is wanted by the International Criminal Court for alleged genocide and war crimes in Darfur perpetrated more than a decade ago.

The transitional government, a power sharing arrangement comprised of generals and civilian figures, has pushed to build peace with rebel groups in Sudan's main conflict zones, including Darfur.

But two rebel groups refused to join a recent peace deal, including the Sudan Liberation Movement (SLM) faction led by Abdelwahid Nour, which is believed to maintain considerable support in Darfur.