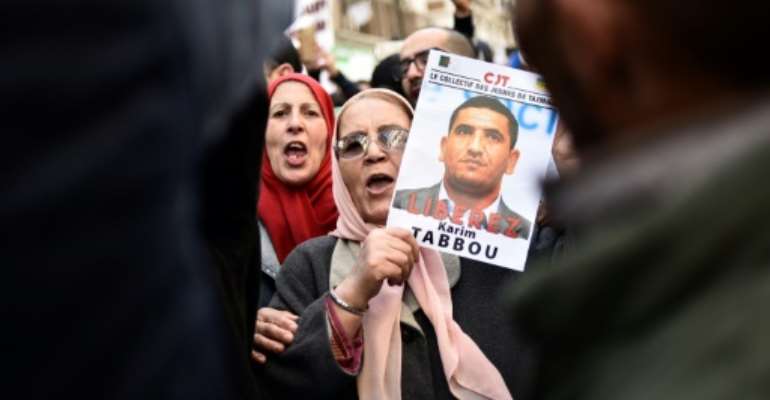 Tabbou is a popular figure among Hirak protesters. By RYAD KRAMDI (AFP/File)

The trial of Algerian opposition activist Karim Tabbou, a key figure in the Hirak anti-government protest movement, started Monday after a series of delays, one of his lawyers said.

The 47-year-old is charged with "damaging the morale of the army".

"The trial of Karim Tabbou began at the court of Kolea," west of the North African country's capital Algiers, Zoubida Assoul wrote on Facebook.

Journalists were initially barred from the court, said the vice-president of Algeria's League of Human Rights, Said Salhi, but they were finally allowed to attend the hearing.

Tabbou was one of the most recognisable figures at mass demonstrations that broke out early last year in protest against longtime president Abdelaziz Bouteflika's bid for a fifth term in office.

The rallies continued well beyond Bouteflika's April 2019 resignation, and were only suspended when the coronavirus pandemic struck.

In another case, Tabbou, who heads a small opposition party, the Democratic Social Union (UDS), was jailed in September 2019 for an "attack on the integrity of national territory" over a video published on the party's Facebook page in which he criticised the army's role in politics.

In March, an appeals court upheld his sentence of one year in prison, but he was provisionally released in July on the orders of Bouteflika's successor, President Abdelmadjid Tebboune, a move seen as aimed at appeasing the Hirak.

He accused Macron of "political hypocrisy" in his support for "an arrogant regime that imprisons journalists, flouts public liberties and subjects the judiciary to its diktat".

Tabbou is one of a string of pro-Hirak figures arrested in an ongoing crackdown.

The prosecution in the trial starting Monday has demanded a sentence of three years in prison and a 100,000-dinar ($780) fine, Assoul said.

The trial had been repeatedly postponed due to the coronavirus pandemic.