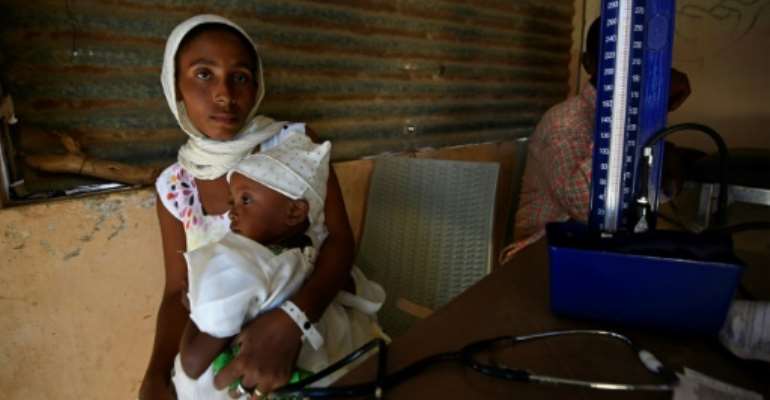 Like all mothers-to-be, Berekhti Burro dreamt of bringing new life into the world in a safe place, with love and care at home to give her baby the best start.

But Burro, nine-months pregnant, was forced to flee intense fighting near her home in Humera in Ethiopia's northern Tigray region, trekking for hours in the blazing sun to safety in neighbouring Sudan.

Now the 27-year-old sits with her husband in their new home; a makeshift shelter in the rapidly growing tent-town of Um Raquba refugee camp, some 80 kilometres (50 miles) from the border.

With her baby due any day now, she has only one thought; what will become of her child? 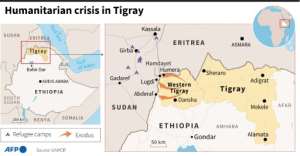 Maps of Ethiopia and the region of Tigray.. By Robin BJALON (AFP)

"It's all I think, about day and night," Burro told AFP.

"I am really scared to give birth here. What if he got sick, or needs an operation. What will I do then?"

She is not alone. UNFPA, the UN Population Fund, estimates there are more than 700 pregnant women among the new arrivals of refugees.

Hundreds are reported to have been killed, and thousands of refugees have fled into neighbouring Sudan. Fighting continues, with Ethiopia's army on Sunday warning civilians to flee the key city of Mekelle before an all-out assault.

Sudan's government is already burdened by its own economic woes and grinding poverty, but authorities immediately sought to prepare camps. 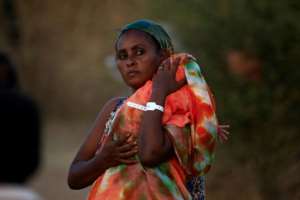 An Ethiopian mother carries her baby in the Um Raquba refugee camp in eastern Sudan, where she fled to from fighting in her homeland of Tigray; healthcare facilities are severely limited. By ASHRAF SHAZLY (AFP)

The numbers of people arriving are overwhelming.

Some 36,000 Ethiopians have already come, according to Sudan's refugee commission, but the United Nations warns numbers could rise to 200,000 within months.

"Sudan is receiving more new refugees per day than most European countries accept in a year," Jan Egeland, head of the Norwegian Refugee Council, one of the aid agencies providing support, said Sunday. "We must help all in need."

Conditions are tough; one mother, pregnant for nine months, lost her baby in Um Raquba "due to a lack of services," said Massimo Diana, UNFPA's head in Sudan.

"No woman should have to go through this," Diana said in a statement. "We are working to ensure services are available to save lives."

Um Raquba camp once housed refugees who fled Ethiopia's 1983-85 famine that killed more than a million people, but it was closed 20 years ago. 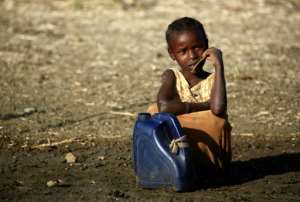 An Ethiopian girl who fled fighting in Tigray sits at a refugee transit centre in Sudan; fighting in Tigray has left some 2.3 million children in urgent need of assistance and thousands more at risk in refugee camps, the UN children's agency says. By ASHRAF SHAZLY (AFP)

Now it has reopened, with a makeshift clinic set up in an old building.

"We can only do check-ups at this clinic," said midwife Nawal Adel, who has examined several expectant mothers, who she notes are "fatigued and lacking proper nutrition."

The clinic provides basic healthcare, with medics treating patients suffering from sicknesses such as malaria and dysentery, made worse because the refugees are sleeping in the open with limited hygiene facilities.

There are also fears of Covid-19, although there have been no reported coronavirus cases among the refugees.

Aid workers worry about the conditions at the crowded camp.

"We don't even have a proper building to provide appropriate medical care," said Mohamed al-Moatasem, a doctor at Um Raquba.

"Most medicines are lacking especially life-saving ones, like antibiotics and anti-malarial drugs."

In a makeshift shelter, Berekhti Calaio rocks her crying son, who was born less than a month ago.

"I struggle to feed my baby because I have not been eating well myself for more than week -- and I can't afford to buy milk," said Calaio. 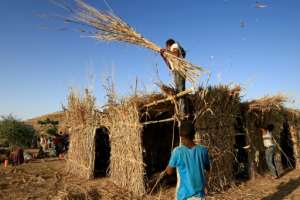 Ethiopian refugees build a house in the Um Raquba camp in Sudan, some of the more than 36,000 Ethiopians who have fled fighting in the northern Tigray region. By ASHRAF SHAZLY (AFP)

The UN is providing kits with basic supplies to help mothers give birth safely, while medics say several pregnant women have been taken to local hospitals.

Despite the conditions, Berekhti Burro says she knows she made the right decision to flee Ethiopia.

"I know I can't go back home to Tigray and that it is much safer here, despite the lack of proper food, water or health facilities," she said.

"I just keep wishing to deliver my baby somewhere clean and safe. All I want for him is to be healthy."