Vaccine roll out nears as US closes early for holidays 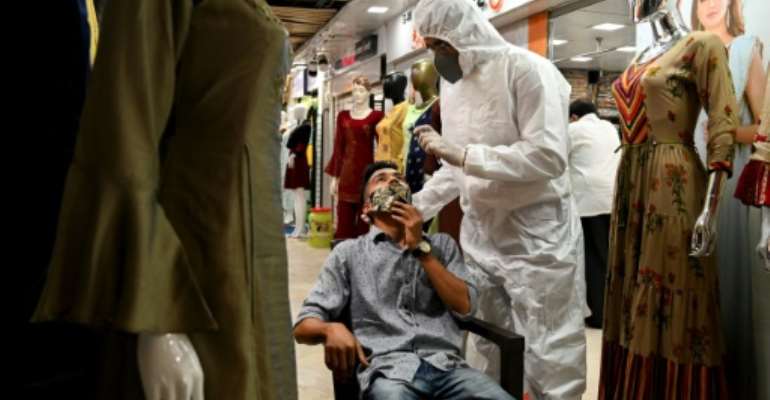 The number of cases in India has crossed nine million. By Punit PARANJPE (AFP)

US giant Pfizer and its German partner BioNTech prepared Friday to file an emergency request to roll out their vaunted vaccine while New York shut its schools and California braced for nighttime curfews heading into the US holiday season.

The world is seeking salvation from scientists and pharmaceutical giants as it returns to the grimly familiar shutdowns and closures that traumatised nations and upturned the global economy at the start of the year.

India's hospitals are once again struggling to cope and its graveyards are filling as infections crossed nine million in the Asian giant -- second only to the United States.

New Delhi quadrupled fines for those without masks in a desperate effort to stave off the dual scourge of the virus and winter pollution enveloping the megacity of nearly 22 million people.

The world is seeking salvation from scientists. By PIERRE TEYSSOT (AFP/File)

And Mexico became the fourth country Thursday to see its death toll breach 100,000.

"We're at a point where we don't see a clear phase of descent," former Mexican health ministry official Malaquias Lopez told AFP. "We don't know where it's going."

Worldwide deaths are approaching 1.4 million and total infections nearing 57 million -- although the true numbers are unknown since countries have different reporting methods and many cases go undetected.

Governments are now pinning their hopes on a vaccine that can save them from business closures that force families to seek dwindling government assistance -- and stay at home orders that put people's mental health under severe strain.

New York City has closed schools, but opened a debate about why bars and gyms are still allowed to operate. By Kena Betancur (AFP)

The first tangible signs of relief could come Friday when Pfizer and BioNTech file an emergency use authorisation request with the US Food and Drug Administration.

"The documents will be finalised today and tomorrow and submitted to the FDA," BioNTech co-founder Ugur Sahin told AFP on Thursday.

The scientific head of the US operation to develop a vaccine said the final green light would probably come in December.

A separate candidate vaccine being developed by the University of Oxford and AstraZeneca has shown to be safe and effective in a smaller study of order adults.

Toll of coronavirus infections and deaths worldwide and in worst-affected countries, as of Nov 19 at 1100 GMT. By (AFP)

The UK government is hoping that its production can be ramped up quickly if it passes its final hurdle in a phase 3 trial and is approved.

But the unprecedented speed at which the vaccines are being developed has raised some alarm.

Top US infectious disease official Anthony Fauci sought to dispel concerns about the vaccines from Pfizer and Moderna during a rare briefing by the White House task force.

"It was a reflection of the extraordinary scientific advances in these types of vaccines," Fauci said.

The World Health Organization cautioned Friday that the anti-viral drug remdesivir that was administered to US President Donald Trump when he came down with the virus in October had "no important effect" on survival chances.

US infections numbers have sufficiently alarmed authorities to request that people stay at home for next week's Thanksgiving holiday -- normally the time when people travel from coast to coast to be with their families.

But not everyone is happy about the new rules.

More than 13,000 people have signed an online "Keep NYC Schools Open" petition after the city closed schools for its 1.1 million students but left open its bars and gyms.'

California will also impose a 10 pm to 5 am curfew from Saturday -- a measure that mirrors one that Istanbul will start imposing for its 15 million residents on weekends starting Friday night.

The disease also claimed the life of another revered figure Friday with the passing of Serbian Orthodox Patriarch Irinej.

The 90-year-old succumbed to Covid-19 only three weeks after his informal second-in-command also died of the disease.

But people in South Australia -- a giant region with fewer than two million -- were given an early reprieve from strict stay-at-home orders after a pizza parlour worker came clean about misleading contact tracers.

Officials said a man who claimed he was a customer of the outlet -- leading authorities to believe the strain was virulent enough to be transmitted via a takeaway box -- in fact worked there.

Low remuneration of bankers could cause some bankers to leak...
15 minutes ago

We'll not allow this old man Akufo-Addo and his old men gov'...
42 minutes ago