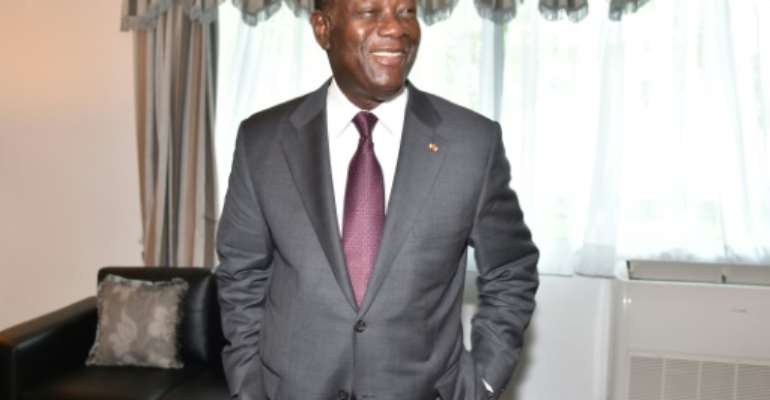 Ivory Coast President Alassane Ouattara, whose contested reelection was ratified by the country's top court Monday, is a US-educated economist who campaigned for stability and growth but whose critics portray as another African leader who took the path of authoritarianism.

The former International Monetary Fund (IMF) official often says he inherited a country "in tatters" in 2010, ruined by a civil war and prolonged political crisis.

Earlier this year the 78-year-old promised not to run again and instead hand over power in the West African country, which has a constitutional two-term presidential limit.

That decision prompted months of protest and deadly unrest, with the opposition boycotting the October 31 election and accusing Ouattara of being a "dictator" carrying out an "electoral coup".

Ouattara, who won with more than 94 percent of the vote, bristled at the term.

"Nobody can tell me that I'm a dictator," he said.

"I didn't want to serve a third term... But did I have the right to put my personal aura above the interests of my party and my country?"

Ouattara has argued that a 2016 revision of the constitution reset his number of terms to zero -- a view backed by the Constitutional Council, the nation's top court.

'Technocrat of the future'

Ouattara, known as "ADO" after his initials, was born on January 1, 1942 in the central town of Dimbokro and his family's stronghold is in Ivory Coast's mainly Muslim north.

He did most of his schooling in neighbouring Burkina Faso, feeding a controversy over his national identity that has dogged him.

After spending most of the 1970s in the United States working for the IMF and earning a PhD, Ouattara was appointed vice-governor of the Central Bank of West African States in 1983 before serving as its chief.

Dubbed a "technocrat of the future", Ouattara served as prime minister from 1990-1993 under the country's revered founding leader, President Felix Houphouet-Boigny.

But "Le Vieux" (The Old Man) died in 1993, and the unity he had safeguarded unravelled.

Supporters of the new president, Henri Konan Bedie, turned on Ouattara, accusing him of having Burkinabe origins, and he was barred from running as a candidate in 1995.

After another stint with the IMF, Ouattara returned to Abidjan in 1999 and was appointed head of the Rally of Republicans party, launching himself into the 2000 presidential campaign.

His candidacy was rejected once again due to accusations that he was insufficiently "Ivorian", and Laurent Gbagbo won that election.

The repeated barring of Ouattara from running for president is widely seen as a trigger of the 2002 low-level civil war that split the country between the pro-Gbagbo south and pro-Ouattara rebels in the north.

He won a long-postponed election in 2010, but Gbagbo refused to accept defeat, triggering a conflict that fractured the nation along similar lines in which 3,000 were killed.

He embarked on an ambitious infrastructure programme and economic growth has averaged around seven to eight percent annually since 2012.

But critics say he has turned a blind eye to entrenched corruption, and the boom has failed to trickle down to the poor.

A former supporter who has gone over to the opposition said Ouattara's third-term bid showed that "the mask has fallen".

"He presented himself as a humanist, a man of peace, a senior civil servant in the Western style who wanted democracy," the ex-supporter said on condition of anonymity.

"He's like most African presidents, a chief who wants to keep power for his clan and doesn't hesitate to use repression."

A government minister responded by saying the president was "sacrificing himself". Ouattara himself has said the same.

"Some of us forced his hand. He's the only one capable of uniting us and steering the ship."