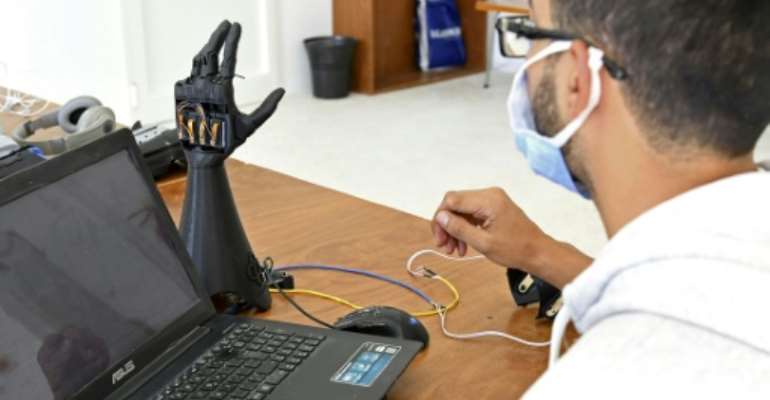 Tunisian startup Cure Bionics are developing a prototype of an artificial hand, which they hope will be more affordable to help amputees and other disabled people. By Bechir TAIEB (AFP)

A Tunisian startup is developing a 3D-printed bionic hand, hoping the affordable and solar-powered prosthetic will help amputees and other disabled people across Africa.

Unlike traditional devices, the artificial hand can be customised for children and youths, who otherwise require an expensive series of resized models as they grow up.

The company Cure Bionics also has plans to develop a video game-like virtual reality system that helps youngsters learn how to use the artificial hand through physical therapy.

Mohamed Dhaouafi, the 28-year-old founder and CEO of Cure Bionics, designed his first prototype while still an engineering student in his home city Sousse.

"One team member had a cousin who was born without a hand and whose parents couldn't afford a prosthesis, especially as she was still growing up," he said. 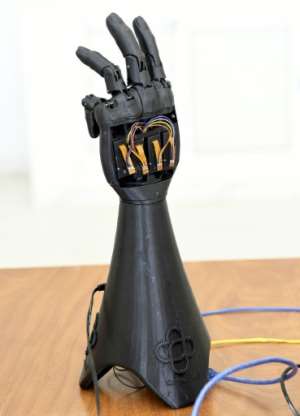 The bionic hand is made of Lego-like parts that can be replaced if damaged or to match a child's physical growth. By Bechir TAIEB (AFP)

"So we decided to design a hand."

Dhaouafi launched his start-up in 2017 from his parents' home, at a time when many of his classmates chose to move abroad seeking higher salaries and international experience.

"It was like positive revenge," he told AFP. "I wanted to prove I could do it. I also want to leave a legacy, to change people's lives."

Dhaouafi pointed to hurdles in Tunisia, where it can be hard or impossible to order parts via large online sales sites. There is a lack of funding and, he said, "we lack visionaries within the state".

But by pooling money raised through sponsored competitions and seed investment from a US company, he was able to recruit four young engineers.

They are now fine-tuning designs, writing code and testing the artificial hand.

The device works with sensors attached to the arm that detect muscle movement, and AI-assisted software that interprets them to transmit instructions to the digits. 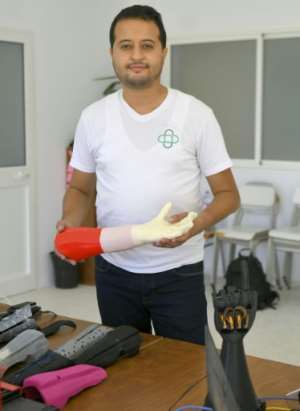 Tunisian engineer Mohamed Dhaouafi, who launched his start-up in 2017 from his parents' home, holds a prototype of an artificial hand. By Bechir TAIEB (AFP)

The hand itself has a wrist that can turn sideways, a mechanical thumb and fingers that bend at the joints in response to the electronic impulses.

To teach youngsters how to use them, Cure has been working on a virtual-reality headset that "gamifies" the physical therapy process.

"Currently, for rehabilitation, children are asked to pretend to open a jar, for example, with the hand they no longer have," said Dhaouafi.

"It takes time to succeed in activating the muscles this way. It's not intuitive, and it's very boring."

In Cure's version, the engineer said: "We get them to climb up buildings like Spiderman, with a game score to motivate them, and the doctor can follow up online from a distance".

3D printing meanwhile makes it possible to personalise the prosthesis like a fashion accessory or "a superhero's outfit", said Dhaouafi.

Cure hopes to market its first bionic hands within a few months, first in Tunisia and then elsewhere in Africa, where more than three-quarters of people in need have no access to them, according to the World Health Organization.

"The aim is to be accessible financially but also geographically," said Dhaouafi.

The envisaged price of around $2,000 to $3,000 is substantial, but a fraction of the cost of bionic prostheses currently imported from Europe.

Cure also aims to manufacture as close as possible to the end users, with local technicians measuring the patients and then printing individually fitted devices. 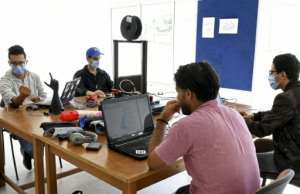 Tunisian engineers test a prototype of an artificial hand, which they hope will be produced at a lower price than existing prostheses. By Bechir TAIEB (AFP)

"An imported prosthesis today means weeks or even months of waiting when you buy it, and again with each repair," the inventor said.

The bionic hand is made of Lego-like parts that can be replaced if damaged or to match a child's physical growth.

It can also be solar-powered via a photovoltaic charger for use in regions without a reliable electricity supply.

The 3D printing of rudimentary prostheses started about a decade ago and is becoming standard.

"3D printing is still in its early stages," he said, "but it is a major game changer in the field of prosthetics and orthotics."

"Developing countries will probably leapfrog to these technologies because the cost is much lower."