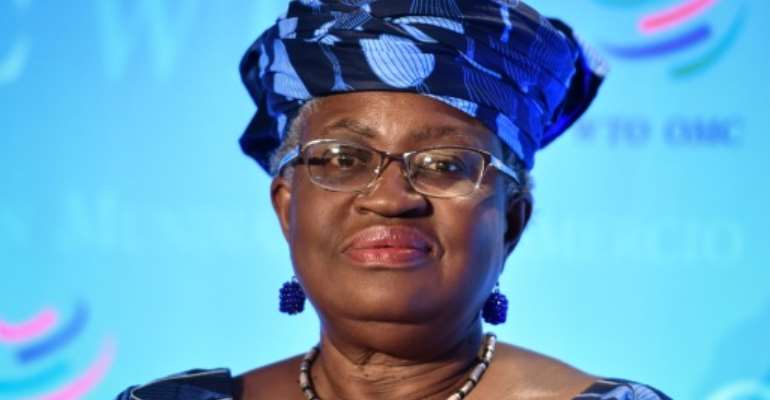 Nigeria's Ngozi Okonjo-Iweala acknowledged Thursday that her bid to head the WTO was facing some "hiccups" after the US opposed her candidacy, but said she was staying positive.

A day after a World Trade Organization selection committee backed her as the best pick to become the next Director-General, Okonjo-Iweala tweeted that she was "happy for the success and continued progress of our WTO DG bid."

"Very humbled to be declared the candidate with the largest, broadest support among members," she said.

On Wednesday, the so-called troika of ambassadors heading the WTO's three main branches determined after three rounds of consultations with member states that the 66-year-old former Nigerian finance and foreign minister was the most likely to obtain the consensus needed to take the top job.

The initial pool of eight candidates for the WTO's top post had been whittled down to two over two previous rounds of consultations, with only Okonjo-Iweala and South Korean Trade Minister Yoo Myung-hee still in the race.

While WTO's 164 members will be given the final say in a meeting on November 9, trade diplomats had expected to see South Korea take the floor Wednesday to withdraw Yoo's candidacy to clear the way for a consensus decision.

But South Korea did not take the floor.

Instead, the US representative did, stressing to WTO members that Yoo was still in the race and had Washington's backing -- making it the only country to oppose the troika's position.

"We move on to the next step on Nov 9, despite hiccups." Okonjo-Iweala said in her tweet.

In a statement Thursday, Nigeria's foreign ministry also stressed that its candidate had "secured cross-regional backing with only the United States opposing the consensus."

It stressed that the country would continue working to "ensure that the lofty aspiration of her candidate to lead the World Trade Organization is realised."

There have been fears throughout the months-long process to find a replacement for Roberto Azevedo -- who stepped down as WTO director-general in August, a year ahead of schedule -- that the combative US stance towards the organisation could complicate things.

The global trade body has faced relentless attacks from Washington, which has crippled the WTO dispute settlement appeal system and threatened to leave the organisation altogether.

But one Western trade diplomat told AFP that the US actions during Wednesday's meeting had caught some off guard.

It was highly unusual that a candidate's decision to remain in the race was announced by a country other than her own, the trade diplomat said, suggesting that South Korea was facing US pressure to stay in the race.

At the same time, the country was also facing anger from African countries and others for not bowing out.

"Korea is stuck between a rock and a hard place," the trade diplomat said.

The standoff cast doubt on whether the WTO would manage to obtain consensus around either of the remaining candidates, conceivably forcing it to start the process over again, the source added.

After Wednesday's meeting, diplomats desperate to find a solution tossed around the idea of removing the consensus requirement and putting the leadership race to a vote.

But Washington would likely flatly reject such a proposal, which would surely result in an overwhelming win for Okonjo-Iweala, the Western trade diplomat said.

"The only consequence of pushing for a vote would likely be to push the US further towards the exit."