Algerians take to streets despite ban on protests 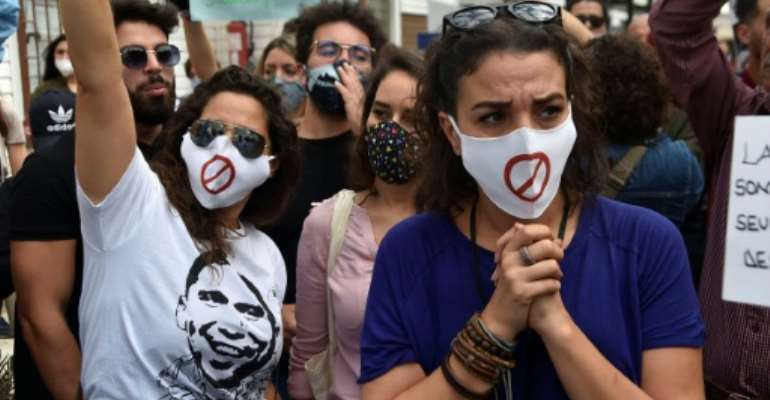 Algerians take part in a rally to call for the release of jailed journalist Khaled Drareni in the capital Algiers. By RYAD KRAMDI (AFP)

Hundreds of Algerians defied a nationwide ban on protests and took to the streets Monday to demand democratic change and mark the anniversary of 1988 demonstrations that ushered in reforms.

Around 400 to 500 demonstrators in Algiers tried to march to the city centre but were dispersed by police who made a number of arrests, an AFP reporter said.

A prisoners support committee, the CNLD, said more than 20 people were arrested including students.

Protests also took place in several other areas of Algeria, with demonstrators chanting: "The people want the fall of the regime" and "Yes to a civil state, no to a military state", according to the CNLD and social media.

They called for the release of members of the Hirak, the anti-government protest movement which last year swept ailing president Abdelaziz Bouteflika from power.

More than 60 people are currently behind bars for acts related to Hirak, according to the CNLD.

Protesters had kept up rallies after Bouteflika stepped down, demanding the ouster of the entire state apparatus, widely seen as inept and corrupt.

But weekly demonstrations came to a halt earlier this year due to restrictions to curb the coronavirus pandemic.

With less than a month to go before a key referendum on constitutional reform -- a vote the government hopes will meet protesters' demands -- many expect a resurgence of rallies.

Monday's protests also marked the anniversary of October 1988 demonstrations which rocked Algiers, prompting authorities to declare a state of emergency.

The protests left 150 dead, according to an official toll, but rights activists say the actual figure was more 500.

The army clamped down on the demonstrators but introduced political reforms which brought an end to a single-party system.