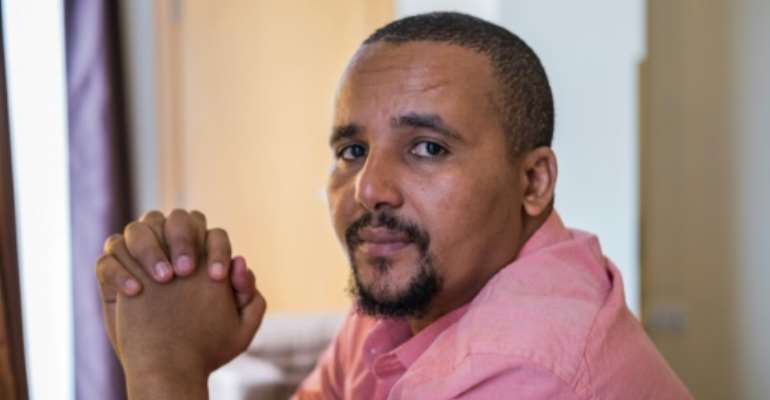 Oromo activist Jawar Mohammed, pictured during an interview with AFP in Addis Ababa in September 2018. By Maheder HAILESELASSIE TADESE (AFP/File)

Jawar Mohammed, the Ethiopian media mogul-turned-opposition politician facing trial on terror charges, is no stranger to sparring with the government.

When a protest movement first emerged in his native Oromia region five years ago, Jawar used his Oromia Media Network (OMN) to help it grow, prompting prosecutors in 2017 to accuse him of plotting a coup.

The protests led to the downfall of the former government and appointment of Prime Minister Abiy Ahmed -- who like Jawar is a member of the Oromo ethnic group, Ethiopia's largest.

The charges were then withdrawn against Jawar, who was quick to claim credit for Abiy's rise, and the men were seen as natural allies.

But less than three years into Abiy's tenure, the relationship has soured.

Jawar today is facing trial on charges of terrorism, incitement to violence, a firearms offence and telecoms fraud.

The dramatic change in his fortunes reflects the turbulence of Ethiopian politics and the complex ties between Abiy and other prominent Oromos.

As Ethiopia gears for elections expected next year, Jawar's trial could shape public perception of Abiy's commitment to democratic change.

Unless prosecutors present compelling evidence against Jawar, his supporters are likely to see a potential conviction as proof the courts are pursuing "politicised" cases, said William Davison, senior analyst with the International Crisis Group.

"This will make it very difficult for the authorities to run a successful election next year that is considered fair by all major actors and constituencies, and so the vote will not be the landmark democratic moment that was hoped for," Davison said.

The protests that began in 2015 were inspired by a government plan to expand the administrative boundaries of the capital, Addis Ababa, into surrounding Oromia -- a proposal seen by many Oromos as a brazen land grab.

Jawar, a stocky 34-year-old with a high-pitched voice and a goatee, drew on the OMN's reach to coordinate the protests against the ruling coalition that had been in charge since 1991.

The target was the powerful Tigrayan faction of the coalition which they accused of quashing dissent and marginalising Oromos.

The OMN is a TV- and web-based outlet that is particularly influential on Facebook, where it has one and a half million followers.

The network became a platform for protest organisers, who urged large crowds to turn out.

Living in exile in the US, Jawar himself kept Ethiopian hours, staying up all night to share photos and updates from the demonstrations.

He positioned himself as a self-described "microphone" for the Oromo youth -- but his prominence earned him powerful enemies.

Commentators accused him of inciting violence against Tigrayans and other ethnic groups, while plainclothes police officers prowled neighbourhoods in Oromia, arresting people for merely watching the OMN.

In the US, Jawar said Ethiopian agents rented offices adjacent to his in Minneapolis, blasting loud music to disrupt his recordings.

Upon returning to Ethiopia after Abiy took office, Jawar initially spoke of transforming the OMN into an independent media outlet modelled on the BBC.

But within a year he was openly at odds with the prime minister.

Like other high-profile Oromo nationalists, he accused Abiy of being a poor advocate for the ethnic group's interests and, more recently, behaving like a dictator.

The feud spilled over into violence last October when Jawar -- who is under close watch by armed guards when in Ethiopia -- accused Abiy's government of trying to remove his security detail and orchestrate an attack against him.

The claim sparked anti-Abiy protests in Addis Ababa that devolved into inter-ethnic violence and left scores dead throughout Oromia.

The following month Jawar announced he would be a candidate in the upcoming elections and joined the opposition Oromo Federalist Congress.

The current charges against Jawar relate to violence that erupted after the shooting death in June of Hachalu Hundessa, a popular Oromo singer who gave voice to Oromo feelings of political and economic marginalisation.

In the days that followed Hachalu's June 29 killing, up to 239 people died in inter-ethnic violence and clashes with soldiers and police.

The aftermath of violence in the Oromo town of Shashamene in July, sparked by the killing of singer Hachalu Hundessa. By - (AFP)

Though the charges against Jawar have yet to be read out in court, his lawyer told AFP they appear to concern a scuffle over Hachalu's dead body that resulted in the death of a police officer.

Jawar was among more than 9,000 people caught up in mass arrests that have stoked criticism that Abiy, the winner of last year's Nobel Peace Prize, is seizing on the unrest to silence political opponents and critics.

In court this week he denounced the case as part of a plot by Abiy to lock up rivals rather than face them at the ballot box.

"The public knows what is really going on. You cannot deceive the public," he told the court, according to his lawyer.