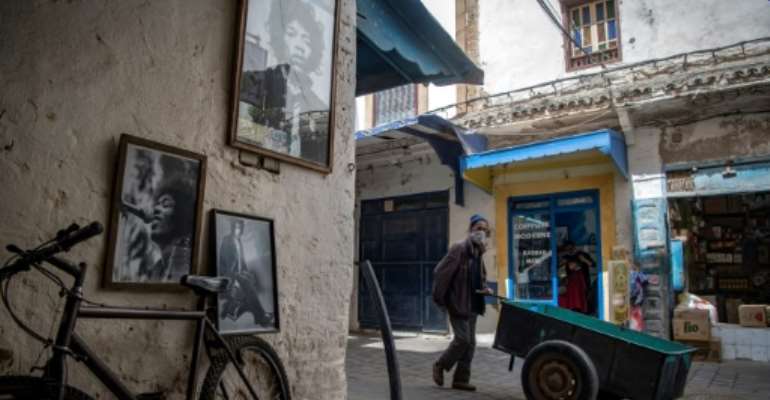 Pictures of late guitar legend Jimi Hendrix are a fixture of life in the Moroccan coastal city of Essaouira and the nearby village of Diabat. By FADEL SENNA (AFP)

Some claim to have seen him, others to have spoken with him -- 50 years after guitar legend Jimi Hendrix's untimely death, a village on Morocco's Atlantic coast pulsates with his memory.

"I saw him here. He was young and carried a guitar on his back," swore Mohammed Boualala, who is in his 60s and grew up in the small settlement of Diabat before joining the army.

In the summer of 1969, Hendrix, the pioneering US guitar wizard whose hits included "Purple Haze" and "Hey Joe", made a brief stop in Essaouira, a former fort town and latter day tourist magnet located five kilometres (three miles) from the village.

There are no soundtracks or images left from the rock icon's journey, but countless myths surround his fleeting trip.

"He visited friends who were staying in the village. It was the last time that we saw him," sighed Boualala, clad in traditional brown qamis tunic.

"They say he is dead but only God knows."

Hendrix choked on his own vomit in a hotel in London on September 18, 1970 after swallowing sleeping pills and drinking red wine.

With its Cafe Jimi and the Hendrix inn, the village has an air of sanctuary, half rock and half flower power.

Hendrix visited the Moroccan city fleetingly in 1969, ahead of Woodstock and a year before his death. By FADEL SENNA (AFP)

Action shots and colourful portraits commemorate the historic passing of the guitar hero just before he wowed the crowds at Woodstock.

"Hendrix looked in good shape" when he visited, insisted Abdelaziz Khaba, 72, his memory seemingly unhindered by the sands of time. "He was surrounded by hefty bodyguards."

Khaba added that he had posed for a snap with the guitar wizard, but "lost the photo".

While trips to Morocco in the 1960s by celebrities including Jim Morrison, Paul McCartney and Robert Plant were well documented, mystery swirls around Hendrix's own stay, giving rise to a dizzying array of fantasies.

His "short visit... produced a mountain of erroneous information and fictitious stories," said Caesar Glebbeek, a Hendrix biographer, in an article on the website UniVibes.

Local legend even has it that Hendrix's "Castles made of Sand" was inspired by the ruins of Diabat's Dar Sultan Palace.

But in reality that track was released in 1967, two years ahead of the star's Morocco visit.

Still, this song title is triumphantly daubed on a wooden plaque nailed to the wall in the little cafe in Diabat.

Further stories of Hendrix's Moroccan adventure abound -- he criss-crossed the country in a van, tried to buy an island off the Essaouira coast, or even the entire village of Diabat, before retreating behind sandcastle walls.

The sands of time have not crushed the local passion for Hendrix, but it is hard to separate fact from fiction surrounding his visit. By FADEL SENNA (AFP)

But there are a few grains of truth buried under those dune-sized myths, if the words of a fellow rock legend are anything to go by.

During Hendrix's Morocco visit there was "stuff going on down there which up to this day has not been solved... there were loads and loads of mystical things" happening, Led Zeppelin lead singer and lyricist Plant said in a podcast last year.

Unlike Brian Jones -- founder of the Rolling Stones, who died in 1969 -- Plant sought to get closer to the Sahara, going inland to Marrakesh, rather than to the Rif mountains, an area famed for cannabis plantations.

Stories about Hendrix enchant Abdelhamid Annajar, who sells records in the shadows of Essaouira's ramparts.

"Many tourists follow in his footsteps and want to know everything," he said. "There are also those who come to relive the good old times."

Laurence De Bure, 68, is among those who revel in the nostalgia.

"Everything was crazy at that time," said the Frenchwoman, who spent two months in Essaouira in the early 1970s with a big group of Americans and has been back in town since January.

"I never saw Hendrix, but I knew a Moroccan girl who sewed velvet and vests under his flamboyant clothes for him," De Bure recalled.

Biographer Glebbeek has amused himself by trying to decipher the truth from the mirages of a purple yesteryear -- yes, Hendrix indeed came to Essaouira, where he stayed in a four-star hotel.

But contrary to the hazy claims of tour guides and nostalgic fans, he "didn't even visit Diabat".