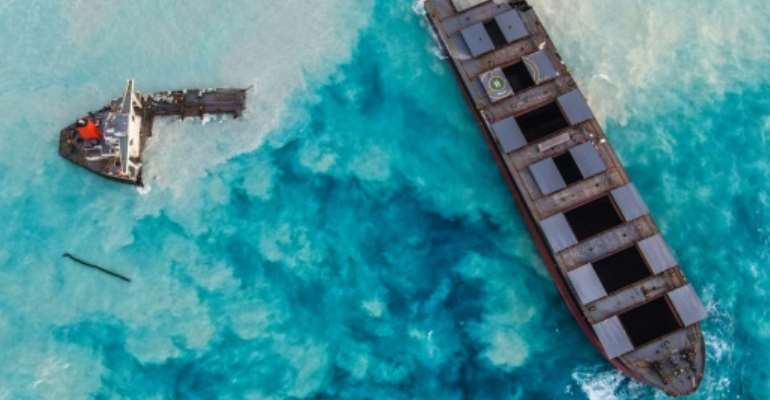 The broken stem of a Japanese-owned ship which ran aground causing a devastating oil spill in pristine waters off Mauritius, has been successfully sunk in the open ocean, the national crisis committee said Monday.

The MV Wakashio ran aground on a coral reef off the Indian Ocean island on July 25 and began leaking oil two weeks later, prompting a race against the clock to pump all the fuel off the bulk carrier before it broke in two.

The operation was successful and two tugboats last week began towing the larger, forward section of the vessel some 15 kilometres (nine miles) out into the open ocean, where it has been sunk to a depth of 3,180 metres.

The smaller section remains wedged on the reef where the shipwreck occurred.

"The planned sinking of the stem (forward) section of the casualty has been completed and at around 3.30pm was no longer visible on the sea surface," read a statement from the crisis committee.

Greenpeace opposed the plan, warning last week that sinking the vessel would "risk biodiversity and contaminate the ocean with large quantities of heavy metal toxins".

Over 1,000 tonnes of oil spilled into the pristine waters that have long been a major draw for honeymooners, and contain precious mangroves and coral reefs.

Last week a team of British scientists arrived to co-ordinate an impact assessment on what damage has been done to the island and how to help the eco-system recover.

International experts from Japan and France are also on the ground assisting the archipelago nation in the wake of the spill.

Senior British marine monitoring scientist Dr Sue Ware told AFP the team would help "determine the footprint of the oil both on the shoreline and... whether it has managed to reach any areas of the seabed" and how it has impacted mangroves, coral reefs and different marine species.

She said efforts by Mauritius to place booms in the water appeared to have been successful in preventing oil from reaching the protected Blue Bay wetlands area.

The captain of the ship and his second-in-command were arrested on Tuesday.

Officials have yet to reveal why the ship, which was making its way from Singapore to Brazil, came so close to the island.