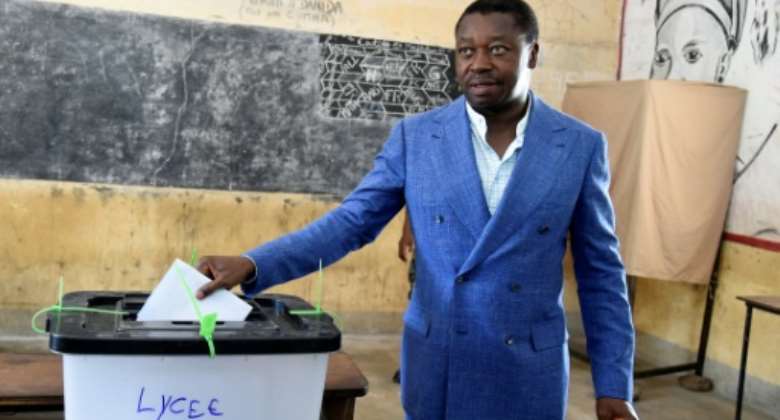 An unexplained death within the inner circle of Togo's military is posing a challenge to the authorities in a tightly-ruled country where for nearly 60 years the army has been the cornerstone of power.

Lieutenant Colonel Bitala Madjoulba, commander of the elite 1st Rapid Intervention Battalion, was found dead in his office in a military base on May 4, the day after President Faure Gnassingbe was sworn in for his fourth term.

An autopsy found that the 51-year-old, a fervent Gnassingbe supporter whose unit helped to crush mass protests in 2017 and 2018, died of a bullet wound.

But the investigators, who are being overseen by Security Minister General Damehame Yark, have been tightlipped, breaking their silence on July 13 to say Togo had asked France to provide "technical help."

In the dearth of information, speculation has ballooned that Madjoulba was murdered -- there is no indication that a weapon was found nearby, pointing to possible suicide -- and local media have suggested divisions within the military, "a settling of scores."

The investigation "is a hot potato," said David Dosseh, spokesman for an umbrella group of citizens' groups called Togo Citizens' Front Upstanding, or FCTD in its French initials.

"There have been enough incidents in the past to show that in Togo, investigations are opened without people knowing what happens afterwards," he said.

One theory, he said, is that "several figures who are close to the regime could be called into question" if investigators pushed their work to its conclusion.

A source close to the investigation told AFP, "All you have to know is that the commission of inquiry is doing its job".

"The victim's body is in the morgue, if there is any need (of it) for the inquiry," the source said.

The ministry is already overseeing several other inquiries touching on high-profile deaths linked to the security forces -- and some cases date back years.

One concerns a 12-year-old boy who was shot dead during a demonstration in April 2013, and another concerns a young man killed in February 2017 during a spontaneous protest about fuel price rises. More recently, investigations have been opened into the deaths of two young men in Lome in April and May.

Gnassingbe took over in 2005 from his father, General Gnassingbe Eyadema, who ruled the impoverished West African state with a rod of iron for 38 years.

The younger Gnassingbe was returned to office in February after elections marked by accusations of fraud and an amendment to the constitution enabling him to bid for two extra terms. He was also granted lifelong immunity from prosecution.

Residents of the dead colonel's home village in Siou, more than 500 kilometres (300 miles) north of the capital Lome, have staged several protests to demand transparency on his death.

"This murder concerns everyone, regardless of our political orientation," said Komi Edoh, a pastor who is president of the Martin Luther King Movement (MMLK), a local rights group.

Nathaniel Olympio, head of the opposition Party of the Togolese, said the affair highlighted "flaws" in the state institutions.

"When someone murders a senior officer in his office, inside a military camp, it shows that the state is unable to guarantee the safety of its officers where they work."

Three local rights groups in May urged Madjoulba's family to file a lawsuit against the state of Togo, a move that was followed in July by a request for the UN's Human Rights Council, an inter-governmental body based in Geneva, to intervene.

The request was filed on behalf of one of the colonel's relatives by an association of three lawyers, said Mawaba Songue Balouki, a Togolese lawyer based in the southern French city of Marseille.

"We are asking the United Nations' Human Rights Council to invite the state of Togo to provide details on this issue, because so far it's been a complete blackout," she said.