Chad president is named a marshal on independence anniversary 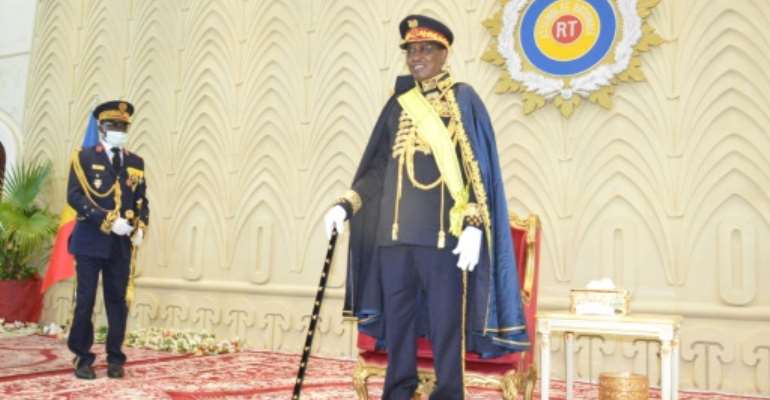 Award: President Idriss Deby Itno was named Marshal of Chad during a ceremony at the National Assembly on Tuesday. By Renaud MASBEYE BOYBEYE (AFP)

Chadian President Idriss Deby Itno was named a marshal, the first in his country's history, in ceremonies on Tuesday to mark the 60th anniversary of independence from France.

Deby, a 68-year-old general who came to power in 1990, was given the honour by the National Assembly, where his party holds a strong majority, after he led an offensive against jihadists in April.

"You are an icon and a symbol for Chad," the speaker of the assembly, Haroun Kabadi, said.

Deby said the prestigious military rank was awarded for a "feat of arms" and he dedicated the tribute "to all my brothers in arms".

"The threat of terrorism is still there, and it is ruthless," he warned.

"The fight against terrorism is a vital imperative and will remain at the core of our concerns."

The offensive was launched after Boko Haram jihadists killed nearly 100 troops in March at a base at Bohoma in the west of the vast arid country.

Bohoma is located in the Lake Chad region, which straddles the borders of Nigeria, Chad, Cameroon and Niger and has become a haven for jihadists who hole up on islands in its marshes.

The toll was the biggest one-day loss in the history of Chad's armed forces, and many commentators saw it as a humiliation for a country which prides itself on its military strength in the Sahel.

The counter-attack, named "Wrath of Bohoma," forced out every jihadist from Chad, Deby claimed afterwards.

However, on Saturday, he acknowledged that Boko Haram "will still do a lot of harm" to Chad in cross-border attacks.

They include General Abdelkader Baba Ladde, a Chadian rebel who had been active in neighbouring Central African Republic (CAR).

He had been sentenced last December to eight years on charges of illegal possession of weapons, criminal association, rape and arson.

Ladde was arrested in CAR by UN troops in December 2014 and extradited to Chad in January 2015.