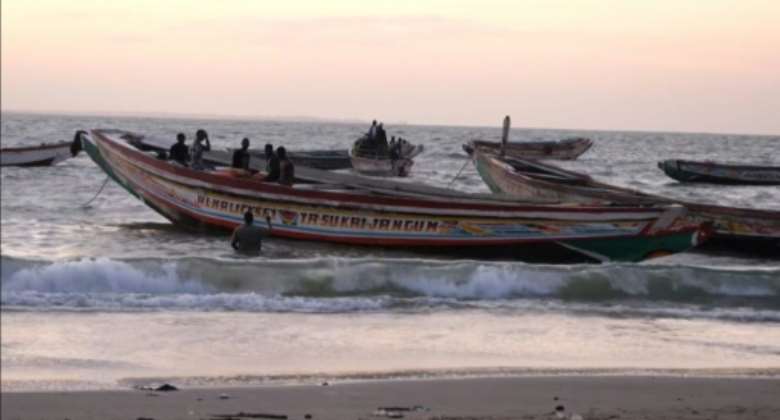 West African migrants seeking to cross to the Canary Islands typically travel in small wooden boats like these. By Romain CHANSON (AFP/File)

Twenty-seven people died after the engines on their migrant vessel failed, leaving them stranded off the coast of Mauritania, the United Nations said on Friday.

The UN's refugee agency and the International Organization for Migration (IOM) said in a joint statement that they were "deeply saddened at the tragic death of 27 people".

A boat en route towards Spain's Canary Islands ran into engine trouble between the northern Mauritanian city of Nouadhibou and the city of Dakhla in Western Sahara, according to the statement.

"Those on board were left stranded at sea and began suffering from extreme dehydration," it added.

The incident occurred "some days ago," the UN said, although the exact date remains unclear.

Mauritanian coastguards rescued a lone survivor, a Guinean man, near Nouadhibou on Thursday.

He initially said that he had been travelling with about 40 other people -- all of whom leapt into the sea when help failed to arrive.

He later clarified that there had been 28 people on board, according to the UN refugee agency's Africa spokesman, Charlie Yaxley.

Migrants have increasingly opted to risk the perilous route from West Africa to the Canary Islands in recent years, as authorities have clamped down on crossings from Libya to Europe.

The Atlantic route is especially dangerous as shoddy migrant vessels have to ply the ocean in order to reach the Spanish islands.

At least 170 people are known to have died trying to reach the Canary Islands in 2019, according to the IOM, compared to 43 the previous year.

"These deaths are preventable, and they are avoidable," Vincent Cochetel, the UN refugee agency's special envoy for the central Mediterranean, said in the statement.

"We must take action to target the smugglers and traffickers who offer false promises to migrants and refugees of safe passage to Europe."

What again do you have for Ghanaians besides economic theori...
31 minutes ago