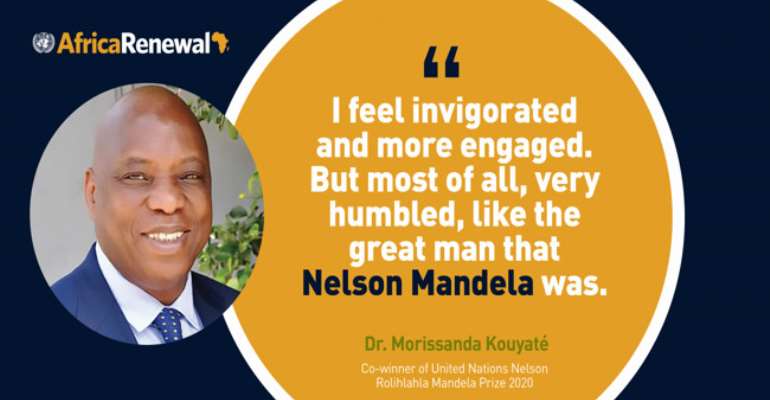 The 2020 Nelson Mandela Prize, which is awarded every five years and recognizes those who dedicate their lives to the service of humanity, will go this year to Marianna Vardinoyannis, of Greece, and Doctor Morissanda Kouyaté, of Guinea, it was announced on Friday.

The President of the General Assembly, Tijjani Muhammad-Bande, made the announcement and will recognize the laureates during a virtual ceremony on 20 July, in light of the COVID-19 pandemic. An in-person award ceremony will take place at a later date, at UN Headquarters in New York.

Ms. Vardinoyannis is the founder and president of two foundations dedicated to children: the “Marianna V. Vardinoyannis Foundation” and “ELPIDA Friends’ Association of Children with cancer.”

She has been involved in the fight against childhood cancer for some 30 years and, thanks to her work, thousands of children have been cured. Notably, the ELPIDA association was instrumental in setting up the first bone marrow transplant unit in Greece, in 1999, and the country’s first oncology hospital for children, in 2010.

Her foundation also supports programmes for the medical care of refugee children and other vulnerable social groups, human rights education, programmes, and the fight against human trafficking.

Ms. Vardinoyannis has been a UNESCO Goodwill Ambassador since 1999.

As Executive Director of the Inter-African Committee on Harmful Traditional Practices (IAC), Dr. Kouyaté is a leading figure in efforts to end violence against women in Africa, including Female Genital Mutilation (FGM). He has received several international humanitarian awards for his work.

Dr. Kouyaté created IAC in 1984 in Dakar, Senegal, at a time when FGM was a highly controversial and sensitive issue for discussion. The organization aims, through education, to change attitudes towards the practice, and allow all African women and children to fully enjoy their human rights, free from the consequences of FGM, and other harmful practices.

It is a partner organization with the UN reproductive rights agency ( UNFPA ), the World Health Organization ( WHO ), and UN childrens’ agency ( UNICEF ).

On Friday, President of the UN General Assembly, Muhammad-Bande, warmly congratulated Mrs. Vardinoyannis and Dr. Kouyaté, and thanked the selection Committee for its hard work and dedication.

The Mandela Prize was established by a UN General Assembly resolution in June 2014, to recognize the achievements of those who dedicate their lives to the service of humanity, by promoting the purposes and principles of the United Nations, while honouring Nelson Mandela’s life, and legacy of reconciliation, political transition, and social transformation.

The selection committee, chaired by the General Assembly President, receives nominations from a broad variety of sources including UN Member States, intergovernmental organizations, and NGOs.

The Prize is one of the ways the UN commemorates the life and legacy of Nelson Mandela, the first democratically-elected President of South Africa, and a life-long rights activist who was instrumental in ending the racist apartheid era in the country. The 2020 Prize was awarded just ahead of Nelson Mandela International Day, held annually on 18 July.

Collins Dauda charged with causing financial loss to the sta...
4 minutes ago