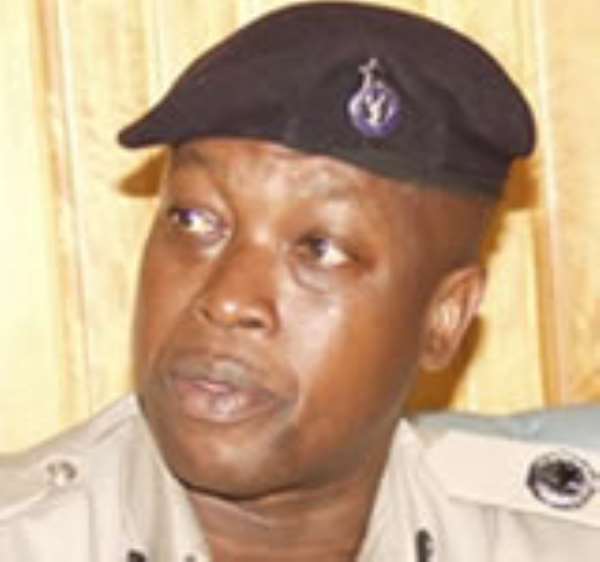 The Director-General of Operations of the Ghana Police Service, ACP Kofi Boakye, yesterday told the Georgina Wood Committee sitting that sometime in May, he received an intelligence tip off that one Alhaji Issah Abass had secured the assistance of some policemen and raided a vessel impounded at Tema with 2,000 metric tonnes of cocaine.

The said Alhaji, who is also the Managing Director of Gazimbe Ltd, a fishing company based in Tema, was said to have raided the vessel, M V Benjamin, and stolen some of the 2,000 metric tonnes of cocaine which had been captured by the Narcotics Control Board.

ACP Boakye said when he got the intelligence report he rang the Alhaji, whom he described as a friend, to find out why he should use the policemen to do that.

ACP Boakye said to his surprise the Alhaji told him that the rumour circulating in town was that it was he Boakye and he the Alhaji who had organised the raid on the ship.

ACP Boakye said he was further told by the Alhaji that it was one Kwabena Amaniing, alias Tegor, a US based Ghanaian, who was spreading the rumour.

ACP Boakye said based on this information, he dispatched some men from the Panthers Unit to arrest Tegor, but was not in the house when his house was searched.

He told the committee that Tegor sought the assistance of one Alhaji Imoro of Kumasi to intercede on his behalf.

ACP Boakye said he, therefore, arranged a meeting in his (Kofi Boakye's) house between Alhaji and Tegor where whisky and champagne were served, in order to solicit information from them.

He said the meeting at his house degenerated into a confrontation between the two suspects and that unknown to him someone among them recorded the conversations at the meeting.

He continued that the tape was released to the Independent newspaper with the desire to portray him as holding secret meetings with drug dealers.

He, however, explained that he had informed his superior officer before and after the meeting, which was the method of operation of the police service.

He said from what transpired at the meeting, he stopped suspecting the Alhaji but believed that Tegor was behind the raid.

He said it came out at the meeting that the Colombians and Nigerians who were, smuggling the cocaine into the country were after Tegor's life, for raiding the ship.

The flamboyant Alhaji, who appeared at the sitting heavily dressed in jewellery of gold, in his testimony, told the committee that he had known the IGP, Mr Patrick Acheampong, way back in Tema when he (IGP) was stationed there as a Deputy Superintendent of Police (DSP).

According to him, they had maintained that friendship till now and the IGP often visited him in his house at Tema while he also reciprocated by visiting the IGP at home and in his office.

He said he had supplied the police with vehicles which he continued to service for them.

He further said he still had in his possession one police vehicle which he was keeping because of non-payment of maintenance charges by the police.

Alhaji Abass, whose counsel, Mr Osafo Boabeng, cross-examined ACP Kofi Boakye, vehemently denied any role in the raid on the ship with the help of the police and described it as mere rumour.