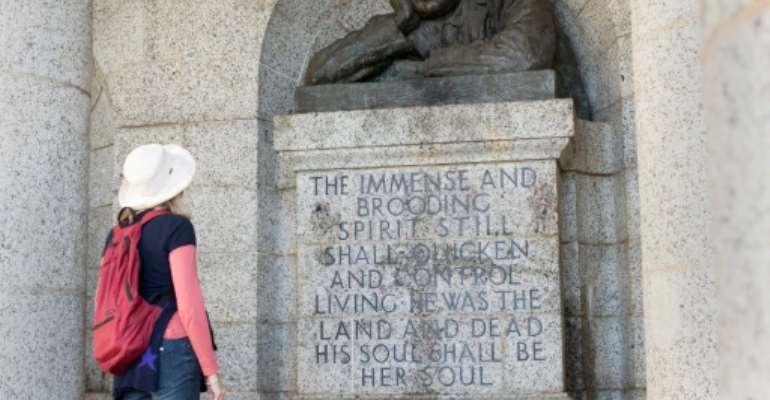 Decapitated: The Rhodes bust had already been targeted twice before. By RODGER BOSCH (AFP)

A white supremacist, Rhodes made a fortune from mining and colonised swathes of southern African territories in the name of the British crown.

"The head of the statue was cut from the bust with what seems to be an angle grinder somewhere between Sunday night or the early hours of Monday morning," Rey Thakhuli, the spokesman for South African National Parks, said in a statement.

The statue is located at a memorial site on the slopes of Cape Town's Table Mountain, near its Devil's Peak.

It is the latest statue emblematic of colonialism or slavery to be attacked since Black Lives Matter demonstrations erupted over the killing of George Floyd, a black American, by a white police officer in Minneapolis in May.

Rhodes was already a target of anti-colonial anger, particularly by South African students.

The Rhodes Memorial was built in 1912 on the slopes of Table Mountain overlooking the city.

Eight lion statues line the giant steps leading up to a granite building with pillars which houses the large bronze bust.

The statue was first vandalised in 2001 when red paint was splashed over it, and again in 2017 when the nose cut off.

Further down the slopes of the mountain at the University of Cape Town, another statue of Rhodes was removed in 2015 during #RhodesMustFall protests.

Rhodes formed the De Beers diamond company in South Africa, and used his wealth to carve out the territory of Rhodesia -- now Zambia and Zimbabwe.

Hailed in Britain at the time as a buccaneering figure who gave heft to the idea that the empire was a civilising cause, he is seen today as a racist and ruthless imperialist.

He left money to Oxford University's Oriel College after his death in 1902 at the age of 48.

Last month, the college voted in favour of removing a statue of Rhodes that had ignited large protests.