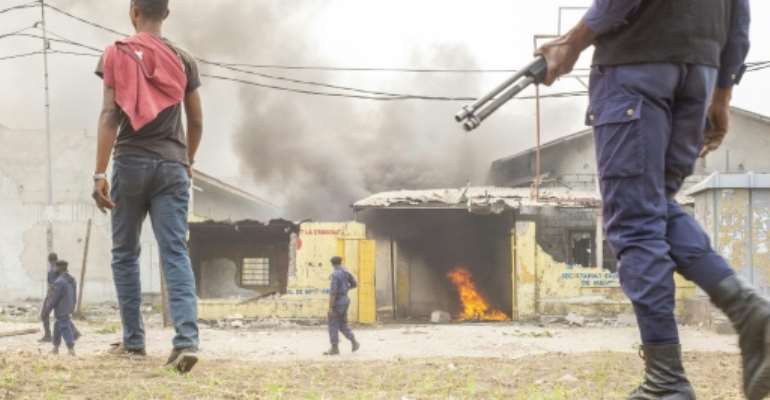 The protests had been banned owing the health state of emergency imposed to limit the spread of the coronavirus. By Arsene Mpiana (AFP)

Two protesters were shot dead and a policeman was lynched Thursday in clashes in the Democratic Republic of Congo over plans to name a new head to the country's election panel, sources said.

The body of one protester was taken to a hospital morgue in the city of Lubumbashi, in southeastern DR Congo, a member of the local United Nations human rights office told AFP.

The UN official deplored the use of force by military police.

An employee of the hospital confirmed that the body was that of a 32-year-old man and said he had received a gunshot wound.

A UN source added that in the capital Kinshasa, another protester was killed and "a policeman was lynched after firing on the demonstrators" while several other police were injured.

Public and private property, including political party offices, had been attacked and set ablaze, according to the UN.

AFP reporters said police in Kinshasa had used tear gas to break up thousands of members of President Felix Tshisekedi's Union for Democracy and Progress (UDPS) who had marched to near the seat of parliament.

In Kananga, a UDPS stronghold in the central region of Kasai, three protestors suffered gunshot wounds when security forces clamped down on a demonstration outside party headquarters, the reporters said.

Other protests were reported in south-central Mbuji-Mayi, the eastern city of Beni and in Kisangani.

UDPS secretary general Augustin Kabuya said three protesters had been killed in Kinshasa and demanded the resignation of his party colleague, Interior Minister Gilbert Kankonde, who Wednesday had banned protests nationwide citing a health state of emergency imposed owing to the coronavirus pandemic.

The emergency restrictions were renewed on Monday for another 15 days.

The marches have been triggered by a decision by the National Assembly to appoint Ronsard Malonda as chairman of the independent national electoral commission, CENI.

The protests were triggered by a controversial National Assembly decision to appoint Ronsard Malonda as chairman of the independent national electoral commission. By Arsene Mpiana (AFP)

Kabila stepped down in January 2019 after 18 years, following elections that ushered in the DRC's first-ever peaceful transition of power.

But, say critics, the vote was marred by fraud that denied victory to Martin Fayulu, a fierce Kabila opponent.

Despite leaving office, Kabila wields political influence behind the scenes, and his supporters have a huge majority in parliament, forcing Tshisekedi into an uneasy coalition.

Tshisekedi, who campaigned on a platform of transparency and fighting corruption, has yet to approve Malonda to head CENI.

Further protests have been called for July 13 and 19.

‘Sputnik-V procurement contract must be re-examined’ – Kwaku...
27 minutes ago

Getting Sputnik-V vaccines from black market using middlemen...
27 minutes ago