By Ryan Smith with Robin Millard in Geneva and AFP bureaus 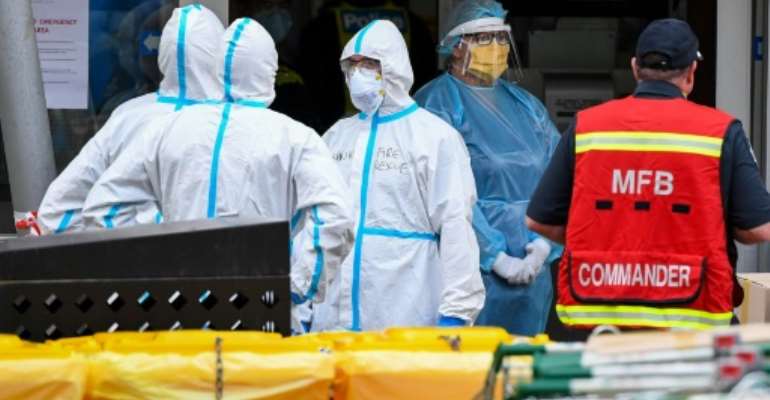 Millions of people in Australia's second-biggest city went into lockdown on Thursday to battle another coronavirus outbreak, as the number of infections worldwide surged past 12 million.

Caseloads and death tolls have risen relentlessly in many of the world's biggest nations, with the virus now claiming over 550,000 lives across the planet.

In Melbourne, five million people began a new lockdown just weeks after earlier restrictions ended as Australia battles a COVID-19 resurgence, with residents bracing for the emotional and economic costs. 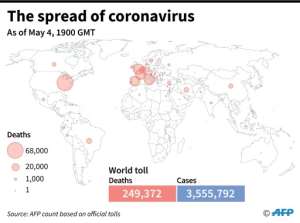 World map showing official number of coronavirus deaths per country, as of July 9 at 1100 GMT. By Simon MALFATTO (AFP)

Shoppers in the state of Victoria -- of which Melbourne is the capital -- stripped shelves bare on Wednesday before the lockdown began, and the country's largest supermarket chain said it had reimposed buying limits on items including pasta, vegetables and sugar.

National and international responses to the virus are under the microscope, with US President Donald Trump's criticism of the World Health Organization as a "puppet of China" coming to a head this week.

The US has begun its formal pullout from the UN body, which opened an inquiry into its handling of the pandemic on Thursday while issuing a strong message on the need for togetherness. 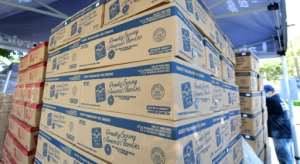 The United States remains the worst-hit nation, with food banks preparing to try to alleviate some of the problems facing the poor. By Frederic J. BROWN (AFP)

"The virus thrives on division but is thwarted when we unite," said WHO chief Tedros Adhanom Ghebreyesus.

The global death toll from the virus has now surpassed 550,000, although roughly half of the 12 million reported cases being classed as recovered.

In a potentially worrying discovery, scientists in Italy said there was "strong evidence" that COVID-19 positive mothers can pass the virus on to their unborn children.

"Our study is aimed at raising awareness and inviting the scientific community to consider the pregnancy in positive women as an urgent topic to further characterise and dissect," said Claudio Fenizia, from the University of Milan and lead study author.

Punishing lockdowns to try to prevent the spread of the disease have led to catastrophic economic downturns.

The United States remains the worst-hit nation but Trump remains keen for the economy to restart despite warnings about the dangers of reopening too soon.

He has even faced off with his own government's experts, lashing out at the Centers for Disease Control and Prevention for issuing school reopening guidelines that he complained were too restrictive.

While a spike in coronavirus cases has forced some states to again close bars and restaurants, the measures do not seem to be affecting the steady drop in new claims for unemployment benefits -- with the number at 1.3 million last week according to government figures.

Local officials in many parts of the US are scrambling to contain the virus and several areas have cancelled plans to reopen, with tens of thousands of new cases reported each day. 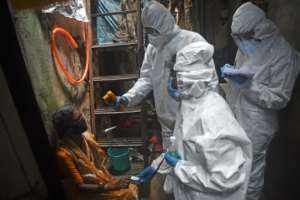 India is among the nations still battling its first wave of infections. By Punit PARANJPE (AFP)

The Trump administration has set off alarm bells among foreign students at American universities, saying they cannot stay in the United States if their entire courses are forced online because of the pandemic.

"I'm kind of scared... I don't have anyone to take care of me if I get ill," said an Indian graduate student in Texas, who asked not to be named.

Some of the world's most populous nations including India, Pakistan and Brazil are still reeling from their first outbreaks. 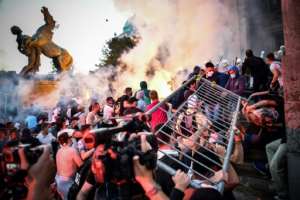 Police fought with outraged demonstrators in Belgrade late on Wednesday, with clouds of tear gas and smoke filling the city centre. By ANDREJ ISAKOVIC (AFP)

In the Middle East, hard-hit Iran reported a record single-day death toll of 221, taking its total to over 12,300.

In Europe, where many nations have successfully suppressed their outbreaks, France continued to re-emerge from the darkest days, announcing the Eiffel Tower would reopen its top level for the first time in three months.

However, countries further east that had lifted their lockdowns sooner than France have found themselves plunged back into restrictions with a resurgent virus.

Bulgaria banned sports fans from stadiums and shut bars and clubs and Serbia announced that it would reinstate a weekend curfew -- sparking two nights of violent protests.

Police fought with outraged demonstrators in Belgrade late on Wednesday, with clouds of tear gas and smoke filling the city centre, a day after thousands came out to protest against the return of the lockdown.

Critics have accused the president of inviting a second wave of infections by lifting the initial lockdown too soon.

"The government only seeks to protect its own interests," said 53-year-old Jelina Jankovic at the rally.

"The people are collateral damage."