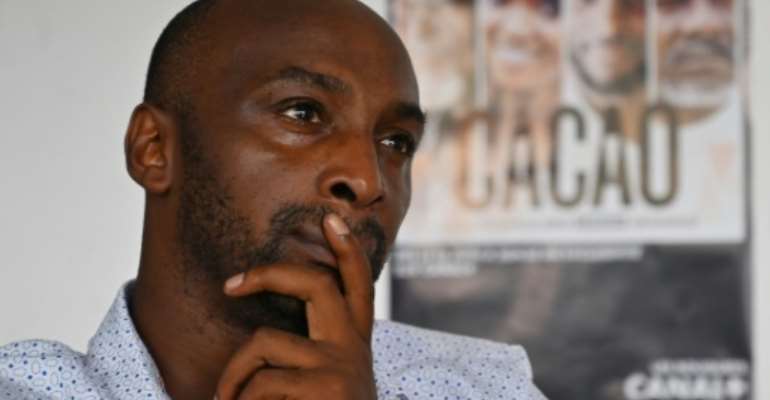 Director Alex Ogou says the brutal world of 'Cacao' can be found anywhere where predators fight over natural resources. By Issouf SANOGO (AFP)

The stakes are big, and so are the egos.

Two clans, the Desvas and the Ahiteys, are fighting it out for control of the local cocoa industry... and boardroom thuggery, love, betrayal and guns are the tools of their trade.

"Cacao", an Ivorian TV soap that began airing on Monday, has ambitions as outsized as the shoulder pads that Joan Collins wore in "Dallas," the 1980s drama to which it is being likened.

In one of the most lavish investments in African programme-making, French producers Canal Plus have signed up a roster of stars and splashed out on big locations, convinced of a potential audience across the continent and beyond.

Whereas the Ewing oil family feuded over black gold in Texas, the rivals in this tale are in the imaginary town of Caodji, fighting over brown gold -- cacao, the raw material of cocoa, of which Ivory Coast is the world's biggest exporter.

"Two families are engaged in a merciless fight for control of the market and the farmers," says Ivorian-French director Alex Ogou, 40, who shot to prominence with a hit series, "Invisible", about Ivory Coast's street children.

The idea for the series comes from Ivorian producer Yolande Bogui, whose father once worked in the cacao industry -- a business as flinty and competitive as chocolate is sweet and pleasurable.

Ivory Coast's cocoa industry was negligible 50 years ago -- today it provides more than a third of the world's output. By ISSOUF SANOGO (AFP)

The show -- which once carried the punchy working title "Guns and Chocolate" -- hit the screens after 18 months in production that involved a thousand people.

Canal Plus on Monday broadcast the first two episodes for free, hoping to hook subscribers for the following 10, to be aired every Monday.

The company told AFP it did not have the ratings for the first episode -- but reaction on social media suggested it could have a hit on its hands.

"We've only had two episodes... and it's already the best Ivorian series ever," tweeted one fan, Inzho MotO-MotO.

The plum role of the evil Jean Ahitey -- already a buzz on Twitter -- is being played by Fargass Assande, who gained a wide following in Africa for the 2015 "L'Oeil du Cyclone" (The Eye of the Storm) by Burkina Faso's Sekou Traore.

Coming to a chocolate bar near you: cacao bean pods, which are processed into cocoa. By ISSOUF SANOGO (AFP)

Ahitey is a study in ruthlessness whose incongruous sayings ("Whoever accepts birds in his mango tree should not fear the sound of their wings") seem fast-tracked to become memes.

The exceptional budget -- the figures are secret -- was put to good use, Ogou said.

The writers "spent time in the places where it all happens, so that they could get a feel for it," he added.

The plotlines touch on trigger-sensitive issues -- the destruction of a sacred wood, deforestation generally, violence by middle-men who refuse to pay peasants the minimum price set by the state, corruption, weaselly traders...

One thing he learned, Ogou said, was that "wealth never trickles down to the farmers -- unscrupulous people exploit weakness or isolation in the bush."

"There are sharks in this business but the themes are the same that you see elsewhere, wherever natural resources attract predators," he said.

Such universality -- and family tensions and loyalties familiar to everyone -- should give "Cacao" a broad appeal, he hoped.

"A film is just a pretext for telling a story. It could be in Africa, in Sweden, at the North Pole or the South Pole -- at the end of the day, you are talking about human beings, feelings, emotions, ambitions, betrayal."

‘We Won’t Tolerate LGBTQ+’ —Ga Chiefs back criminalization b...
57 minutes ago