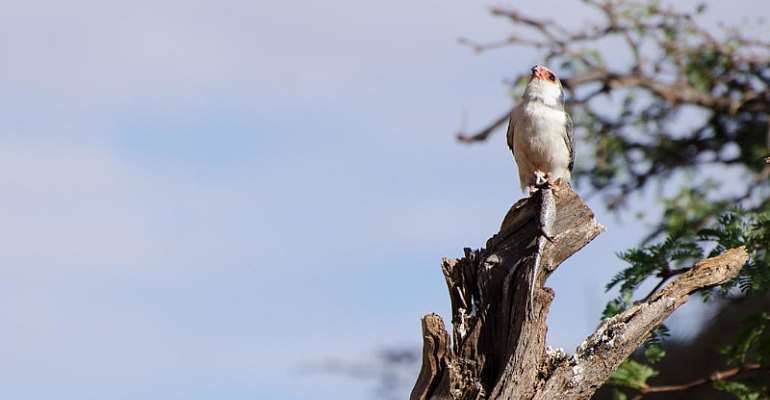 Lizards in South Africa eavesdrop on their bird neighbours so they can work out when falcons are approaching and might eat them, a new study has found.

Researchers discovered that when recordings of alarm calls made by sociable weaver birds were played at the nest colonies, the resident Kalahari tree skinks – a type of lizard – would flee to safety.

But when sounds of the birds in a more relaxed mood were played, the lizards carried on foraging or basking.

The findings, published in the journal Behavioural Ecology, show how this surprising relationship between skinks and weavers allows them to live in close proximity to pygmy falcons: a mutual enemy.

The pygmy falcon, one of the world's smallest birds of prey, doesn't build its own nest. Instead, it uses chambers inside nests of sociable weavers: sparrow-sized birds that nest communally in structures resembling huge haystacks in the crowns of thorn trees.

The falcons mainly hunt lizards and insects, but will occasionally take a weaver bird, hence their cries of alarm each time a falcon flies back to the nest.

The six-month-long study led by Anthony Lowney, from the University of Cape Town's FitzPatrick Institute of African Ornithology, saw the team of researchers attaching a wireless speaker to 20 pairs of camelthorn trees in Tswalu Kalahari, a 114,000-hectare private game reserve in the Northern Cape Province of South Africa.

In each pair of trees monitored, one had a weaver nest colony in it, the other didn't. Observations of the lizards' behaviour were made using a spotting scope (a portable high-powered telescope), and the weaver bird recordings were only played when the weaver birds weren't around.

The study found that the skinks' behaviour is at least partially learned, rather than instinctive, because the skinks at weaver colony trees clearly responded to and distinguished between the recorded calls, while those at trees without weavers didn't.

Lowney said he found this aspect of the study exciting, but not surprising.

“Some animals have a lot more cognitive ability than we generally give them credit for,” he told RFI.

“In arid environments, conditions can be harsh so you may expect animals to be able to need to quickly adapt to certain pressures.”

Lowney's interest in the skinks was sparked while doing research on pygmy falcons. He often saw skinks beneath weaver colonies where the falcons nested, and was aware of earlier studies that showed there are always more skinks around trees with colonies than those without.

For those skinks that do live beneath the weaver colony, and learn the weaver birds' audio signals, there are clear benefits.

The lizards can crawl inside the giant nest to keep warm in winter, or escape from the heat in summer, and the ground beneath the nests is “rich in nutrients from all the weaver droppings and this attracts insects, which is the skinks' main diet”.

The latest findings are in line with other similar research. A 2009 study showed that Madagascan spiny-tailed iguanas, a large lizard species, increased their vigilance for predators on hearing the alarm call of another bird ally: the Madagascar paradise flycatcher.

Lowney said he'd always had a soft spot for reptiles and the hours he spent watching the Kalahari tree skinks had renewed his respect for them.

“It always puts a smile on my face when I see them,” he said.