In Senegal's north, Fulani herders boxed in by virus 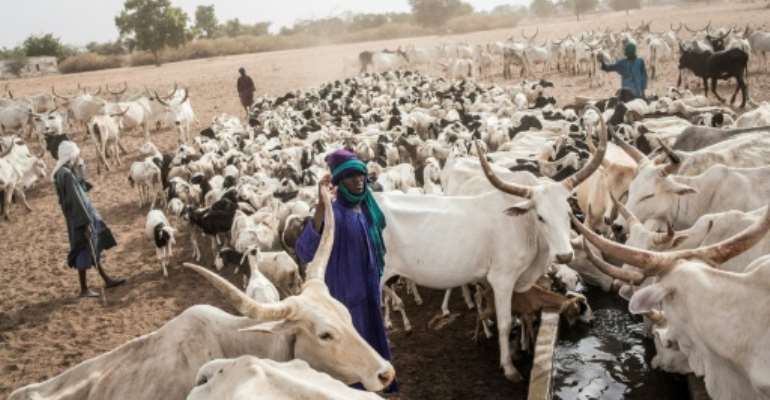 Many Fulani in Louga have turned to the so-called "Dolly Ranch" as a last resort. By JOHN WESSELS (AFP)

Scores of white cattle plod into the village for their only drink of water of the day. Herders, wearing brightly-coloured robes, walk in tow.

Soon, they will wander miles back across the semi-desert of northern Senegal in search of sparse yellow stubs poking through the sand.

"There is no water, there is no pasture," says Adama Ba, a herder whose 100-head of cattle is his lifeblood, in his native Pulaar.

"I'm scared now. There is nothing here".

The 56-year-old is one of thousands of semi-nomadic Fulani pastoralists who have been stuck in Senegal's Louga region, in the Sahel, since the onset of the coronavirus pandemic.

The sparsely populated area is a sandy flatland, dotted with spindly gum arabic trees. The odd donkey shelters underneath them to escape soaring noon temperatures.

Pastoralists move with their cattle from north to south across Louga, and further afield, as pasture dries up, before returning north again with the summer rains.

But recent times have been hard. Less rainfall, attributed to climate change, has meant less grazing.

Worse, months of government restrictions on movement designed to curb the virus have coincided with the hardest months of the dry season.

Unable to travel far in an inhospitable landscape, herders have been forced to spend what little money they have on animal feed.

"Pastoralists are part of the population that has been the most impacted by the COVID-19 crisis here in Senegal," says local MP Yoro Sow. 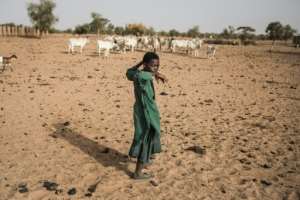 Pastoralists move with their cattle from north to south across Louga as pasture dries up. By JOHN WESSELS (AFP)

"They are extremely vulnerable."

The Fulani herders' main of source of income -- selling livestock -- has also been cut off, because the local government has banned large markets over contamination fears.

Even when the restrictions lift, it is not clear that all the herders will have the money to leave for better grazing.

In the hamlet of Mbetiou Peulh, which is inhabited for only part of the year, Adama Ba says he must travel nearly 100 kilometres (60 miles) south soon, to a refuge containing pasture.

A shortage of cash means his car has to stay behind.

Ba's phone rings as he's walking across the scrub. A stroke of luck: A local official arrives in a blue pick-up, and agrees to transport one of his cows to the nearest town to be sold.

No rain, no money

Weekly markets known as "loumas," which can draw traders from as far as the seaside capital Dakar, were the region's economic heart until they closed in March.

To help herders, local authorities are distributing animal feed and are allowing them to sell livestock in small numbers, but it is not enough.

Mamadou Cisse, 51, the livestock ministry's veterinary inspector in the region, said that the dry season is always gruelling for herders.

But bans on large gatherings, travel, and the closure of the loumas have been "very, very, very difficult," he said. 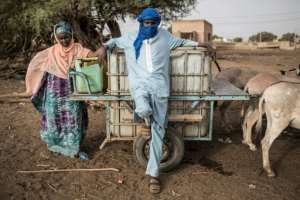 Months of government restrictions on movement designed to curb the coronavirus have coincided with the hardest months of the dry season. By JOHN WESSELS (AFP)

Any money earned is spent on animal feed and sacks of rice for the family.

"The big crisis is here in the heart of small villages," Daff says, adding that herders are surviving by helping each other as much as possible.

A local NGO named ADID estimates the number of herders affected to be in the tens of thousands. Senegal is a majority-Muslim nation of some 16 million people.

Many Fulani in Louga have turned to the so-called "Dolly Ranch" as a last resort.

The inside looks nearly as barren as the surrounding region, but herders use the ranch less often during plentiful times, so it retains pasture for longer during the dry season.

Pastoralists, who enter for free, camp in straw huts surrounded by their animals. 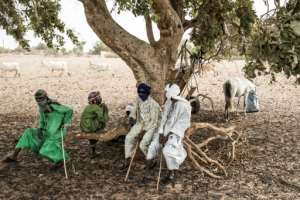 Herders have been forced to spend what little money they have on animal feed. By JOHN WESSELS (AFP)

But herders take refuge every dry season. "Coronavirus simply accentuated a drastic situation that was already there," he says.

Late and irregular rains in recent years have been blamed for lower-quality pasture, complicating pastoralists' lives.

Standing near a watering point, in front of hundreds of cattle with lyre-shaped horns, Djibi Djarga Sow, 63, says he remembers a time when fodder was richer, and animals produced better milk and meat. 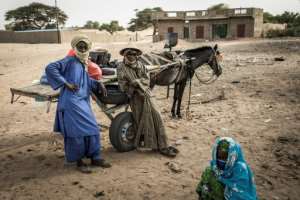 Even when the restrictions lift, it is not clear that all the herders will have the money to leave for better grazing. By JOHN WESSELS (AFP)

Dressed in a blue robe and carrying a wooden switch, the herder explains, that he has walked 250 kilometres (155 miles) to reach the ranch.

"Dolly is the refuge," he says, adding that herders' livestock is their "salary".

Asked what herders can do to tackle to their problems, he responds that prayer is their only weapon.