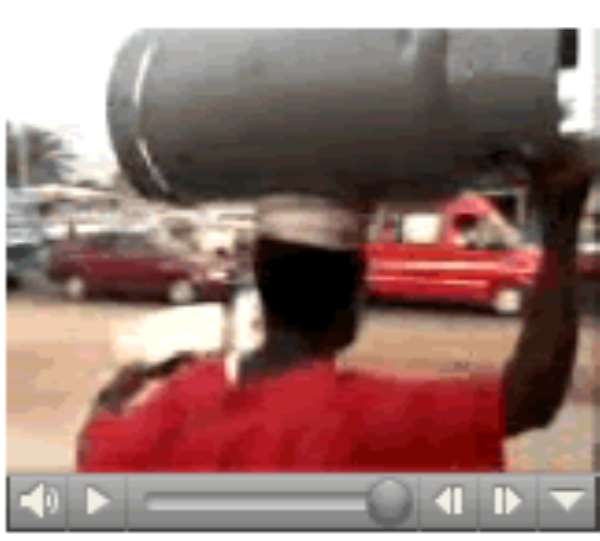 The Accra Metropolis has been hit by shortage of Liquefied Petroleum Gas (LPG) for almost two weeks now.

The situation is taking a heavy toll on both domestic and commercial businesses as drivers of both commercial and private vehicles continue to queue at LP filling stations with their cars for gas.

People who require the product for domestic use are also seen in town with their gas cylinders in desperate search for cooking gas.

The Times yesterday visited a number of gas filling stations including the Odorkor Mamba Gas Filling station where more than 50 taxi cabs and private cars had queued although the station said it has no supply.
The marketing manager of the station, Augustine Siaw-Wolfensohn, said the last quantity of 21,780 kilogrammes of gas received by the station on June 13 finished on Sunday as a result of the rush for it.

Kwaku Manu, a taxi driver told the Times that for the past week he had to park his taxi since he had run out of gas, the situation he said, was affecting his livelihood.
He said he preferred the gas to petrol as the latter is expensive and leads to loss adding “when we use gas, we are sometimes able to make 50 per cent profit at the end of the day”.
Another taxi driver who gave his name only as Kwame said he was able to get gas in Kasoa after parking his vehicle for more than three days.

“When we use gas, we charge moderately and that saves the passenger some cedis,”he added.

An old man, Uncle Ebow, who looked helpless said he had been to about eight gas filling stations without getting gas thus compelling his family to resort to the use of charcoal.

At Awudome, where a notice has been placed, a manager of the station, Stephen Adaku, said the last supply received by the station was on June 7, and that had finished a week ago.

He told the Times that the station receives about 100 calls daily from customers including restauranteurs, bakers, and chop bar operators.

He expressed worry about the shortage and wondered why officials of Tema Oil Refinery (TOR) had not come out with any public statement on the situation.

The situation at the Glory Oil Filling Station at Lartebiokorshie was not different. There, the Manager, Seth Nortey, told the Times that the station had its last supply on June 7.

He said the station ran out of gas last Friday and all efforts to get new supplies had been futile.
When contacted, the Public Relations Officer of TOR, Aba Lokko, told the Times that the refinery was not aware of any shortage of L.P gas in the metropolis.

She said however that L.P gas “is not for taxi drivers” but that TOR would investigate the cause of the alleged shortage.
Godfred Gibba-Blay reports yesterday that there was a long queue of cars waiting in Tema to be served at some gas filling stations which had supply while other drivers also went round other places in search for the product.

Both the Star Gas Company and Gas Point Enterprise told the Times that the companies received supply of 10 tons of gas each on Monday morning, but with the huge patronage the stock could run out any moment from now.

At Kayens Company Limited at Community 2, gas had run out and people, most of them taxis drivers, were seen with their cylinders and cars in queues in anticipation of gas supply in the day.

There are reported cases of gas shortage in parts of the Sunyani but it has not yet developed into queues at the gas stations reports Kingsley E. Hope.
In the Tamale municipality, charcoal sales are said to have shot up as a result of the shortage of gas for the past two weeks.
Majeed Yakubu reports that consumers have given up any hope of getting gas supplies and have therefore gone back to the use of either firewood or charcoal.

I'm not bothered about a likely coup, I worry of possible up...
19 minutes ago