By Katherine Hutchinson - The Conversation 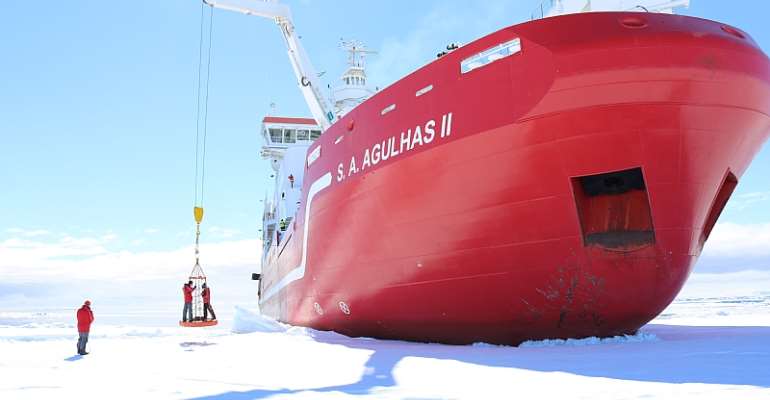 Journeying to one of the most remote parts of the planet to gather valuable ocean data. - Source: Provided by author.

Ice shelves, massive floating bodies of ice, are well-known for their buffering effect on land-based ice sheets as they slow their flow towards the sea. This buffering effect plays an important role in moderating global sea level rise.

The Antarctic Peninsula has been experiencing high levels of change during the last 30 years due to atmospheric and ocean warming. Larsen A Ice Shelf collapsed in 1995 and Larsen B broke up in 2002 . The demise of its neighbours has raised questions regarding the future stability of Larsen C, Antarctica's 4th largest ice shelf.

The enhanced melting of ice shelves is concerning as this leads to the thinning and acceleration of their tributary glaciers which means more fresh water is injected into the surrounding ocean. The consequence of this is a rise in sea level and a change in ocean properties. Both having potentially disastrous repercussions on human populations and natural systems.

During the last 30 years Larsen C has exhibited considerable variability in ice thickness and extent. Yet the role of the ocean in driving these changes remains unclear.

To understand what processes were underway I embarked on the Weddell Sea Expedition to one of the most remote areas of our planet, the Antarctic Weddell Sea. My team and I focused our oceanographic measurements in the area of exposed ocean lying between Larsen C and the recently calved massive iceberg A-68. The icy landscape of the Weddell Sea. Katherine Hutchinson

We wanted to measure the properties of the ocean adjacent to Larsen C Ice Shelf to find out what processes are at play. The aim was to improve our understanding of how the ocean could impact the stability of the ice shelf. This region is crucial in setting the properties of Antarctic Bottom Water.

We were able to identify that a foreign water mass was flushing onto the continental shelf adjacent to Larsen C, bringing heat to the area. Our data revealed a high level of mixing between this warm water and the local very cold waters. This could have implications for the melting of the ice shelf and a change in properties the parent waters of Antarctic Bottom Water.

Previously, little was known about water mass mixing and transformation offshore of Larsen C because of harsh sea‐ice conditions. The thick ice prevents many ships from being able to navigate into the area and obtain extensive oceanographic measurements. This left an incomplete picture of the processes at play and prevented us from seeing the link between the warm water mass flushing onto the continental shelf and ocean conditions at sites along the ice shelf front . Map showing the area of interest in Antarctica. The red dots showing where we undertook oceanographic measurements as part of the Weddell Sea Expedition. Katherine Hutchinson

The measurements we took in the Weddell Sea adjacent to Larsen C Ice Shelf represent the highest spatial resolution sampling in this area to date. They provided us with a clear view of the underwater conditions in an area where we have very little data.

The mighty SA Agulhas II, a powerful ice-class ship, enabled us to gather high resolution data during the the Weddell Sea Expedition. The results revealed that the heat brought into the area is redistributed via effective mixing with local shelf waters. This showed that there is potential for transformation of the source waters of Antarctic Bottom Water.

We also identified the possibility for a flow of the continental shelf waters into the ice shelf cavity underneath Larsen C, raising questions about future ice shelf melting and thinning. Scientific equipment being deployed in the Weddell Sea by the light of the Antarctic midnight sun. Katherine Hutchinson

Antarctic Bottom Water is the heaviest water mass in the global ocean. More than 50% of it is formed next to the ice shelves of the Weddell Sea.

Our findings from the expedition are important as the high levels of mixing showed that any changes happening far from the Antarctic coastline could be communicated inshore via the intrusion of the warm water onto the continental shelf. The mixing of this water with the parent waters of Antarctic Bottom Water could in turn change the properties of this globally important water mass.

The characteristics of Bottom Water are vital to our global climate through the role that this Antarctic water mass plays in facilitating the transport of heat, salt, carbon, oxygen and nutrients around the world's oceans.

Where to from here?

The measurements we took in the Weddell Sea are extraordinarily valuable and provide great insight into a remote and data-sparse part of our ocean. But scientists need to go beyond observations. We need to make use of innovative tools such as numerical climate models to further understand ocean-ice shelf interactions and the feedback effects on the global ocean.

However, none of the global climate coupled models currently used to inform the Intergovernmental Panel on Climate Change ( IPCC ), directly stimulate circulation underneath ice shelves. A consequence of this deficiency is that important ocean-ice shelf interactions, and the processes that form Bottom Water, are not explicitly included in the models that are used to help inform climate policy and adaptation strategies.

Our global climate projections are therefore missing a key piece of the puzzle.

To address this, the ocean-climate modelling community is at the early stages of including ocean-ice shelf interactions in future climate projections. This is an exciting next step in climate science.