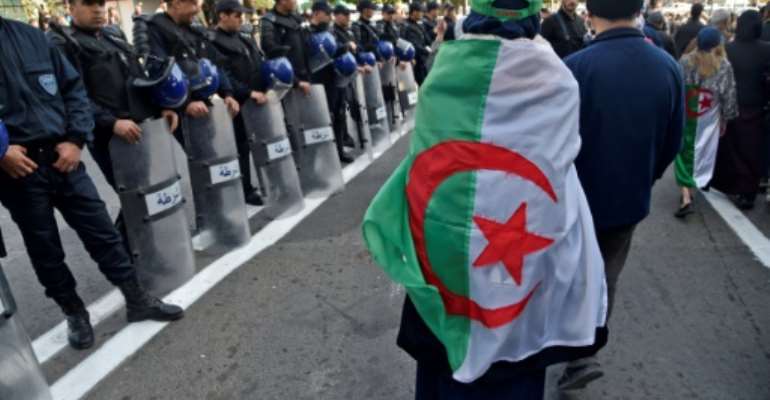 Vast demonstrations broke out in Algeria in February last year after then-president Abdelaziz Bouteflika announced a bid for a fifth term after 20 years in power. By RYAD KRAMDI (AFP/File)

A leading figure in Algeria's "Hirak" anti-government protest movement has been released from jail after a court late Sunday cut his prison sentence, one of his lawyers told AFP.

Abdelouahab Fersaoui, who heads the civic group Youth Action Rally (RAJ), was arrested in October during a demonstration and in April was sentenced to one year in jail for an "attack on the integrity of the national territory".

Lawyer Hocine Benissad, speaking after the appeal, said Fersaoui's sentence was reduced to six months, adding: "He will therefore be released from prison since he has already served his sentence."

The 39-year-old academic was released overnight, according to Said Salhi, vice president of the Algerian League for the Defence of Human Rights (LADDH).

"We are really relieved. We are delighted with this release because Fersaoui has endured a long detention. This is only the reparation for a serious injustice," Salhi said.

The prosecution had asked for a tougher sentence at the appeal hearing, which was organised by videoconference and held behind closed doors because of the coronavirus pandemic.

Fersaoui was arrested on October 10 last year during a demonstration in support of "Hirak" detainees in front of the capital's main court.

During his trial in March, Fersaoui denied the charges, which he said were based on his Facebook posts that had contained no incitement to violence.

Another "Hirak" activist, Ibrahim Daouadji, who in April was sentenced to six months in prison, also appeared before the Algiers court on Sunday for "incitement to unarmed assembly".

"Mr. Daouadji was given a six-month suspended prison sentence. He too will be released," Benissad told AFP.

Despite the COVID-19 outbreak that has forced the popular movement to suspend its protests since mid-March, a crackdown has continued against regime opponents and independent media.

He stepped down in April after losing the support of the army, but protesters had continued to hold mass rallies demanding a sweeping overhaul of the ruling system.