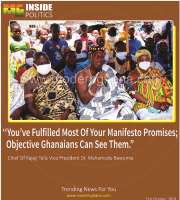 Ghana is located on West Africa's Gulf of Guinea only a few degrees north of the Equator. Half of the country lies less than 152 meters (500 ft.) above sea level, and the highest point is 883 meters (2,900 ft.). The 537-kilometer (334-mi.) coastline is mostly a low, sandy shore backed by plains and scrub and intersected by several rivers and streams, most of which are navigable only by canoe. A tropical rain forest belt, broken by heavily forested hills and many streams and rivers, extends northward from the shore, near the Cote d'Ivoire frontier. This area, known as the "Ashanti," produces most of the country's cocoa, minerals, and timber. North of this belt, the country varies from 91 to 396 meters (300-1,300 ft.) above sea level and is covered by low bush, park-like savanna, and grassy plains. The climate is tropical. The eastern coastal belt is warm and comparatively dry; the southwest corner, hot and humid; and the north, hot and dry. There are two distinct rainy seasons in the south--May-June and August-September; in the north, the rainy seasons tend to merge. A dry, northeasterly wind, the Harmattan, blows in January and February. Annual rainfall in the coastal zone averages 83 centimeters (33 in.). Volta Lake, the largest man-made lake in the world, extends from the Akosombo Dam in southeastern Ghana to the town of Yapei, 520 kilometers (325 mi.) to the north. The lake generates electricity, provides inland transportation, and is a potentially valuable resource for irrigation and fish farming.