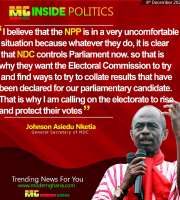 Ghana's population is concentrated along the coast and in the principal cities of Accra and Kumasi. Most Ghanaians descended from migrating tribes that probably came down the Volta River valley at the beginning of the 13th century. Ethnically, Ghana is divided into small groups speaking more than 50 languages and dialects. Among the more important linguistic groups are the Akans, which include the Fantis along the coast and the Ashantis in the forest region north of the coast; the Guans, on the plains of the Volta River; the Ga- and Ewe-speaking peoples of the south and southeast; and the Moshi-Dagomba-speaking tribes of the northern and upper regions. English, the official and commercial language, is taught in all the schools.