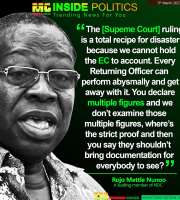 Ghana is bounded on the north and northwest by Burkina Faso, 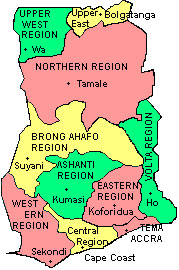 on the east by Togo, on the south by the Atlantic Ocean, and on the west by Cote d'Ivoire. Formerly a British colony known as the Gold Coast, Ghana was the first nation in sub-Saharan Africa to achieve independence (1957). The country is named after the ancient empire of Ghana, from which the ancestors of the inhabitants of the present country are thought to have migrated. The total land area is 92,100 square miles (238,537) square kilometres).

Ghana is a lowland country, except for range of hills on the eastern border. The sandy coastline is backed by a coastal plain that is crossed by several rivers and streams, generally navigable only by canoe. In the west the plain is broken by heavily forested hills and many streams and rivers. To the north lies an undulating savanna that is drained by the Volta river, which flows south to the sea through a narrow gap in the hills. Lake Volta, in the east, is one of the largest artificial lakes in the world. Ghana's highest point, in the eastern hills, is about 2,900 feet (884 meters) above sea level.

The climate of Ghana is tropical, but temperatures vary with season and elevation.

Except in the north, two rainy seasons occur, from April to June and from September to November. In the north the rainy season begins in March and lasts until September. Annual rainfall ranges from about 40 inches (1,015 millimetres) in the north to about 80 inches (2,300 millimetres) in the south-east. The harmattan, a dry, north wind, blows from December to March lowering the humidity and creating hot days and cool nights in the north. In the south the effects of the harmattan are felt in January. In most areas the highest temperatures occur in March, the lowest in August. The average annual temperature is about 86F (30C).