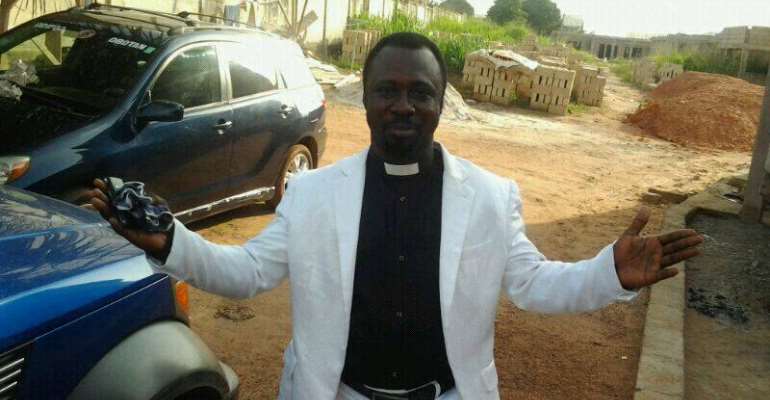 A Kumasi based “powerful” “man of God” with Nzema roots, who went by the name Odiifo Obotan is now a born again christian and is revealing so many secret works of some of his other fake colleagues in “ministry”.

In a Whatsapp publishing which is going viral, Odiifo Obotan, recounts a scary dream in which he had an encounter with an agent of real God,( not the fake one many of his colleagues have a pact with to make their “church” business), who warned him to repent or face the wrath of the almighty. Obotan, according to his audio confessions which he urge people to share, said, at first, he was not willing to give up all properties and dirty wealth he had amassed through (“wagadril”) fraudulent schemes, miracles and many diabolic activities in the “church” but eventually gave up because he showed remorse in all the vices and deceptions he was involved in.

He revealed the fake miracles of some so called big name Pastors/Prophets on national TV and radio and confessed that many of the testimonies that people give at conferences, crusades and other gospel events were mostly staged or callers contractors doing the bids of the Pastors on air. He took the lid off some of the so called miracles on TV or radio which were all acting ( do you want us to call it fake? ). He also mentioned the chemistry of most of the miracle oils sold in some of the churches with most source being frytol oil and color dye. (OMG!). But frytol oil will not kill us though. Hmmmmmm!

Obotan, in his prime years, was a force to reckon with. He was one of the pillars of new age Pentecostalism whose modus operadi were instant miracles, suspense prophecies and living ostentatious lifestyle. According to his audio, he was once escorted everywhere with three super macho ( muscled) men and owned fleet of exotic cars. For those of you in Kumasi, you will remember this guy and other big names on radio such as...........,..............;..............................;. Particularly, he mentioned Osofo AGA ...something ( do you remember this guy who on radio would mention his numbers each followed by his name) as one of his boys. ( We are checking our archives for some of their audios to share soon)

With the turn of events, all we are asking is this, Is he telling the truth? Are many Pastors capable of performing real miracles? If a man of God threatens someone who has a dissenting views, with death or sickness, isn’t that Pastor using spells or occult powers? Can a man of God really do miracle and take the credit for himself? Why is it that almost all the major Prophets start in Kumasi and later move to Accra? Who are the master occult leaders leading all the young pastors to hell? Are there big names that people are afraid to mention?

We are building a profile on all the Pastors who have defrauded many of their congregations and miracle seekers, if you are a victim, send us an inbox message for discussion.

Are there more of such fake asofo in your community? Link us up.

God bless You all. A CHRISTIANITY IN ACTION ( C.I.A Ministry) article.

A Division of Prekese GhanaMedia. God bless you once again.