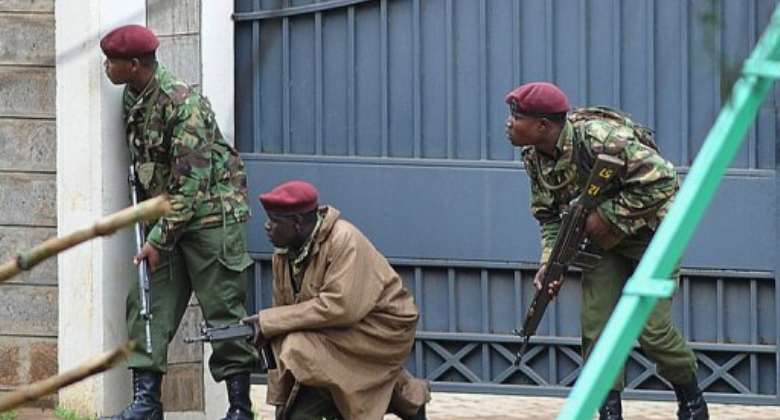 PARIS (AFP) - As gunshots and explosions rocked Nairobi's Westgate mall, those behind the horrifying attack used Twitter to provide something of a running commentary of events.

"What Kenyans are witnessing at #Westgate is retributive justice for crimes committed by their military," Somalia's Al-Qaeda-linked Shebab tweeted.

The depiction of the attack at the Westgate shopping centre is the latest example of extremist groups using Twitter to broadcast their messages and boast of their criminal accomplishments.

Twitter has now suspended the account, but others quickly sprung up in what one analyst likened to an online version of Whac-A-Mole.

Twitter pulled the Shebab insurgents' account @hsm_press after it was used to claim the weekend attack, which according to the latest Red Cross tally has claimed 62 lives. Two other accounts run by the group had already been suspended over the past year.

While Twitter said it doesn't comment on individual accounts "for privacy and security reasons," its terms of service state that "users may not make direct, specific threats of violence against others; targeted abuse or harassment is also a violation."

Florence Gaullier, a Paris-based attorney specialising in Internet law, said it was possible Kenyan officials had asked Twitter to pull the account.

"If Twitter wants to stay in the country, it's certainly in their interest to conform," she said.

Like almost any significant event today, comments related to the attack flooded social networks, with some witnesses -- like @shirleyghetto -- live-tweeting from inside the shopping mall. With official pronouncements at times scarce, others looked desperately for updates about the fate of loved ones caught inside the shopping centre.

For instance, Al-Qaeda in the Islamic Maghreb (AQIM) in April organised a series of question-and-answer sessions on Twitter, while Islamist extremists in Syria and last week the Taliban tweeted that they had killed a senior Afghanistan election official.

"This way of communicating and posting propaganda online lets groups reach a larger audience," he said.

On Monday, Twitter suspended another account(@HSM_presoffice2), which purportedly belonged to Shebab insurgents, but which could not be authenticated.

J.M. Berger, an analyst researching extremism, cautioned the media against reporting on every account labelled as belonging to the Shebab.

"Please ponder the relative news value of publicising each new HSM Twitter mole that pops up after the previous is whacked," he wrote on @intelwire.